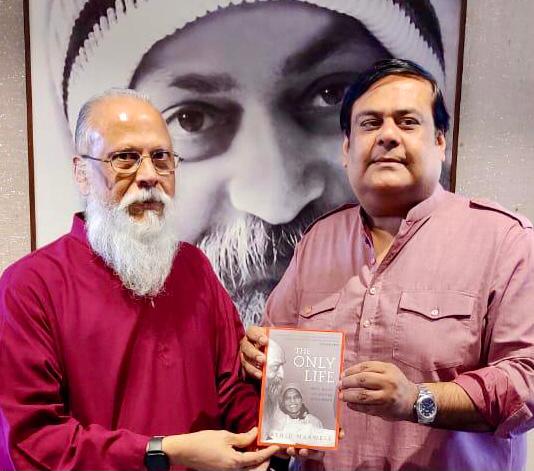 MUMBAI, 23 Apr: Award-winning filmmaker Rahul Mittra is all set to make a mega series on Ma Yoga Laxmi. He has acquired the rights of British author Rashid Maxwell’s best seller, ‘The Only Life: Osho, Laxmi and a Journey of the Heart’, on Rajneesh’s first secretary who was upstaged by her own controversial protégé, Ma Sheela, and later ostracised and banished.
Rahul Mittra Films & Jar Pictures will produce this series to be directed by Ranjan Chandel, with Oshoworld Foundation and Sanjay Grover as Co-producers.
A one of its kind biography, ‘The Only Life’ is the story of an ordinary girl who blazed a path for herself and others, leading to an unprecedented international movement which grew around Osho in the 1970s and 80s, one that Laxmi was at the helm of, before a narrative full of pathos was unfolded, where her manipulative protégé Ma Anand Sheela usurped her place. Heartbroken, ostracised and later banished it led to Laxmi’s isolation and seeking to rediscover herself by choosing devotion for her master over despair.
“The vision and work of Osho and its revolutionary effect on Laxmi and his people needs to be widely understood. I am particularly excited that this project is being helmed by Rahul Mittra Films and Jar Pictures and, given their proven track record, I am sure full justice shall be done to this sensitive subject which has important consequences for society as a whole,” said Rashid Maxwell from England.
“As a filmmaker I have always tried to look out for good content. Ma Laxmi’s story is what I want to tell and what the world needs to know. I want people to know that, for Ma Laxmi, Osho was her only life. Even when her own protégé, Sheela, usurped her position, Laxmi’s devotion to her master was total and absolute,” said filmmaker Rahul Mittra.
The Only Life is an account of a life of starkly contrasting ups and downs. Laxmi’s journey and the way she lived continues to serve as a crucial illustration for dealing with life’s adversities through kindness, devotion and awareness, especially in these present chaotic and precarious times.