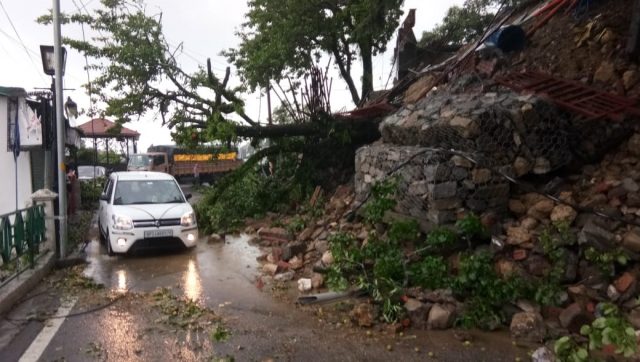 By OUR STAFF REPORTER
Mussoorie, 13 Jul: Due to incessant rain, here, for the past two days, the roads have been blocked due to landslides and debris has accumulated on the roads of various areas. The retaining wall of a building near Indira Bhawan collapsed due to heavy rainfall and, as a big tree fell on the road, the road was obstructed.
Only after the fallen tree was removed could traffic be restored. In the morning, the movement of large vehicles had been completely stopped. Efforts were made by the Mussoorie Fire Service and the Administration to remove the trees and debris.
On the other hand, the Mussoorie Yamunotri National Highway 707A was blocked due to heavy landslide near Kandikhal, due to which traffic could not ply. There was a long queue. The debris on the route was cleared by National Highway workers with a JCB.