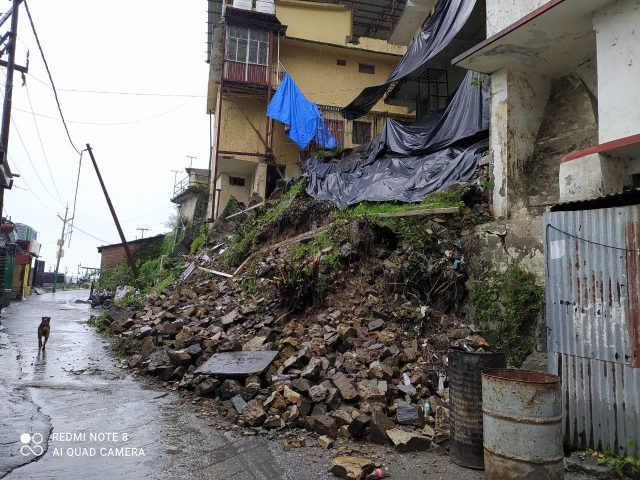 By Sunil Sonker
Mussoorie, 19 Jul: Life has been completely disrupted due to the continuous rain for the past two days. At the same time, there has been a drop in the temperature, while the road has been closed after a heavy landslide on the Mussoorie Suwakholi Dhanaulti road on Monday, causing long traffic jams on both sides. The road was closed at 6 a.m. but could not be cleared till 10 a.m.
People expressed dissatisfaction with the arrangements to deal with such problems. On the other hand, due to the collapse of the retaining wall of a big house near the Civil Hospital, it is in danger of subsiding. It is reported that the foundation of the house was damaged by work on laying water pipes by the Jal Nigam. After laying the pipeline, the repair of the road was not done and, during the rain, the retaining wall got filled with water, leading to the collapse.
House owners Sanjeev Goyal and Gurpreet Singh said that many times they had talked to the Jal Nigam officials to repair the pit but no action was taken. They have demanded that the repairs be undertaken by the Jal Nigam and compensation provided.
There is also a continuous landslide near the Galogi Power House on the Mussoorie Dehradun road, due to which the road gets blocked from time to time. JCBs have been deployed on both sides.

Garhwal Post has established itself as a credible, balanced and forward looking newspaper in India. Based in Uttarakhand, the daily is read by the aware, socially and culturally responsible, high-income elite of society.
Contact us: info@garhwalpost.in
local free dating sites fun dates brooklyn local nude singles