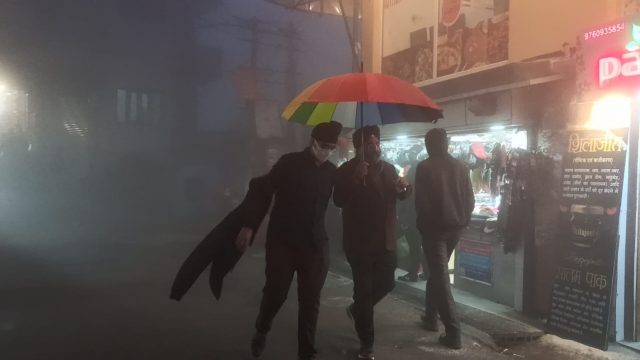 By Our Staff Reporter
Mussoorie, 24 Oct: The weather suddenly changed late evening in the evening, here, today. There was also a sharp drop in the temperature due to the rain and dense fog.
People had to put on warmer clothes and switch on heating equipment. It is reported that, due to snowfall and rain in the high altitudes, cold weather has knocked on the doors of Mussoorie, too. Due to dense fog in Mussoorie, visibility became low, greatly inconveniencing people. It became dark early.
Tourists however enjoyed the changing weather, hoping there would be snowfall. Local traders were also happy, especially those selling warm clothes. According to the Meteorological Department, there may be rain and snowfall in the hill areas in the next 24 hours, with light rain in the surrounding areas of Mussoorie and Dehradun.

Garhwal Post has established itself as a credible, balanced and forward looking newspaper in India. Based in Uttarakhand, the daily is read by the aware, socially and culturally responsible, high-income elite of society.
Contact us: info@garhwalpost.in
free dating sites for free free dating sites canada