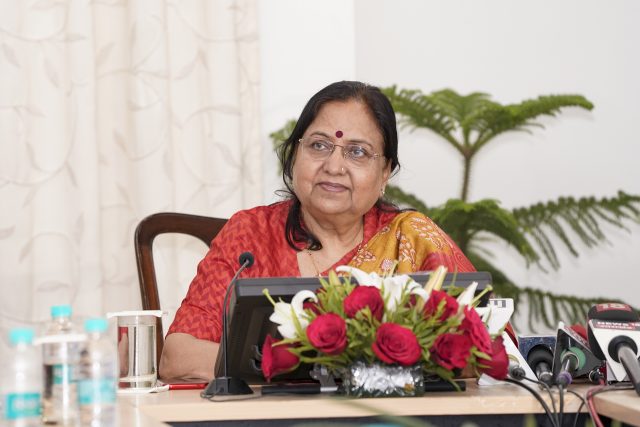 Dehradun, 26 Aug: Uttarakhand Governor Baby Rani Maurya interacted with media representatives at Raj Bhawan here, today, on the occasion of completion of three years of her tenure.
Governor Maurya said that effective efforts are being made to make Uttarakhand a progressive state during her tenure. She added that her tenure had been quite eventful and she had found that women of Uttarakand were very hardworking and courageous. She added that every possible help had been provided by Raj Bhawan to these women during her tenure here.
In response to a question by Garhwal Post Editor, Satish Sharma, she asserted that directions had been given to making available detailed action plans, training and easy loans to self help groups so that women could be empowered economically in the state. To his question what she planned to focus during her remaining tenure, she said it was her dream to provide all possible help to the women from the hills to make them self reliant and enable them to fulfil their dreams. She added that Raj Bhawan and the Government had taken very serious note of certain recent incidents involving drug de-addiction centres in the state and she had directed strict monitoring of these in the state. They are now being listed so that they could be regulated and monitored effectively. Strict action has been directed against centres found to be in violation of law and rules. She said that action would be taken against the private drug de-addiction centres that have been operating without any registration.
Maurya stated that awareness programmes had been organised in the Raj Bhawan on Tuberculosis. Nutritious food packets were distributed among TB patients. Raj Bhawan also adopted five patients of tuberculosis. Expenditure of treatment on these children was borne by Raj Bhawan. In response to her wish, the universities of Uttarakhand, too, had adopted many remote villages and were ensuring developmental work there. Clear directions had been given by her to the vice chancellors to implement the new education policy.
The Governor added that relief material and oxygen concentrators had been sent to various districts during the COVID-19 pandemic. She disclosed that a village in every district was adopted to be developed as a model village. Various development works had been completed in Jhajhra and Gahna villages of Dehradun and Kumaon, respectively.
Observing that various precious medicinal herbs were found in Uttarakhand in abundance, she said that production and distribution of these herbs were being promoted through self help groups.
She also felt that the home stay scheme ought to be promoted in the state to stop migration. Raj Bhawan had organised many programmes to create awareness about the menace of drug abuse. She said that a Sari Bank had been set up for distribution among poor women. School bags and books were also distributed among needy children on the occasion of the birth anniversary of Dr Ambedkar. Masks and sanitisers were also distributed in these colonies during the COVID-19 period.
Maurya also spoke about work undertaken by the Red Cross Society in the State and appreciated its efforts. She added that Raj Bhawan had started awards for the best women employees. She also had directed reservation of one seat in every stream at the universities for the students who lost their parents due to COVID-19.
Brijesh Kumar Sant, Secretary to the Governor, Additional Secretary Jitendra Kumar Sonkar and media representatives from various organisations were present on the occasion.