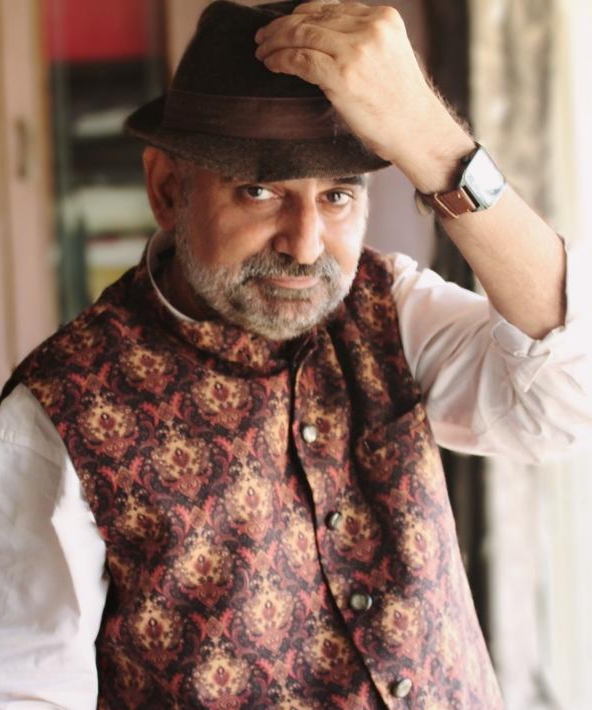 Dehradun, 17 Sep: Rajesh Beri is a unique kind of multitasker and a multitalented person. Educated to be an Electronic Engineer, he served with the Railways till 1997, before becoming a writer, poet, story teller, actor and a film maker. As an engineer with the railways, he developed a level crossing ring which sounds at the time of closure of the crossing when a train is approaching. Before this, a man was posted at the level crossings to manually ring a bell. He also developed a signalling device that holds the signals. Both these products are widely used by the Railways now across the country.

A poet by heart, Beri used to write poems sometimes and participate in Kavi Sammmelans when he came across well-known satirist and Hindi poet Shail Chaturvedi, who encouraged him to seriously pursue his writing skills. Though initially hesitant, he started pursuing his writing seriously and finally gave up his job with the Railways in 1997 to pursue an independent and creative career!

Beri has penned several TV serials in a wide range of genres like family or social drama, comedy, crime and horror. In fact, as a writer, he holds the record of writing the maximum number of episodes of any serial in the Limca Book of Records. He has written 1328 episodes of the TV serial called Bhabhi that was aired on Star Plus, including the dialogues, story, screenplay, and lyrics without any assistant or help. He has also written over 930 episodes of a very popular crime serial, Savdhaan India. He has written lyrics, too, for several TV serials. Some of the popular TV serials written by him include Shubh Vivah, Sonu Sweety, Kehta Hai Dil, Jab Jab Bahar Aayee, Jugni Chali Jullandhar, Kabhi To Nazar Milao, Saubhagyawati Bhava, IPS Diary (aired on Doordarshan), Dafa 420, India Calling, Cats, Jyoti, Soni Mahiwal, Begusarai, Shanno Ki Shadi, Bhola Bhagat, etc.

He has also made several short films for educational purposes on subjects such as health, environment, child labour and other social issues.

He was associated with one of the leading TV production houses, UTV, led by Ronnie Screwvala for several years and then was also creative head of Saregama Productions for which he also recorded more than 20 audio stories for their Caravan radio device. Now, he is Creative Head of ABZY Cool TV Channel, which focuses on content for the youth mainly.

He reveals that stories of real life heroes coming from relatively modest backgrounds have always inspired him and one such hero was Sarbjit Singh, an Indian spy who was lynched in a Pakistani jail some years ago. Consequently, he wrote the story, screenplay and dialogues of the film, Sarbjit, starring Aishwarya Rai as Sarbjit’s sister who struggled for several years for his release from Pakistani prison. Directed by Omung Kumar in 2016, this film was nominated for an Oscar award, too. He also recalls that he was inspired by Tenzing Norgay, the first person to climb Mount Everest, and felt that if Norgay could do it, he could also achieve his dreams! He says that biopics interest him a lot and some of his current projects include biopics. He says that his biopics have been usually chosen from among the common people, who may not be necessarily so well known but have contributed significantly in their particular spheres in an inspiring way. Imran Chacha is the real life story of a hockey player and later coach from Gorakhpur, while Lahori Singh is the real life story of a Sikh man who had to reinvent himself during the partition days. Yet another biopic on which he is currently working is about CP Vohra, the first Indian to climb Mount Everest. He states that he has met most of his characters of biopics over and over again during the course of his writing and has tried to see the world from their perspective. Another subject he is working on currently is a webseries called Victims of Border, which tells real heartrending stories of gullible people who were jailed for unknowingly straying across the border.  The webseries according to Beri has tried to bring out physical torture, mental breakdown, injustice inflicted on them, on the one hand, and the wait and hope of their families for their safe return. It is the story of their scars that time could never heal, Beri says. He recalls having met scores of such persons and their families and also those who were knowingly or unknowingly used as agents by the intelligence agencies for petty gains in return.

Beri has also written the story and the screenplay of Jolly LLB 3. Unlike the first two editions, this one is a periodic film based in pre-independence India when the Jallianwala Bagh Massacre occurred. Like in the previous two editions, Saurabh Shukla again plays the judge, Beri says. He has also written a novel, called Tere Bagair, which is currently being made into a film in Bengali language. He adds that several of his projects have been held up currently due to the Corona lockdown, as has happened with most filmmakers. However, instead of whiling his time away, he decided to take up the work of grooming and promoting local talent in distant corners of the country. He claims that his stories have been written with the objective of giving back something to society. Beri says, that during the lockdown, he thought of promoting and grooming local talent locally. This would mean that the talent would not have to shift to Mumbai and struggle for long in order to get work and be recognised. Modern technology has made it possible to work from anywhere in the country and not just be based in Mumbai. He says that he can foresee much of the film and TV work shifting out of Mumbai in the near future. Beri adds that he has undertaken this task of promoting and grooming local talent in mission mode. Dehradun is one such destination, according to him. It has talent as well as skills and if promoted and groomed properly, it can turn out to be a good hub of creative activities such as film making, etc. Apart from the talent, it is also bestowed with abundant natural beauty, which also needs to be promoted. Apart from Dehradun, he has also undertaken similar projects on mission mode in North East India and Bhopal as he believes that there is no compelling reason to be based in Mumbai anymore to make creative films and be able to showcase them. Beri says, “On behalf of ABZY Cool channel, I have come here to help the local talent make films or other TV content for us. I am not charging any money for this but I am lucky to be supported by the channel in this mission. Ultimately, whatever is filmed and developed in Mumbai has also to be showcased through TV and silverscreens. Mumbai was just a medium which is no more required. Films or TV shows made anywhere can be released on silverscreens or TV. That is the purpose and the objective.  I am wholeheartedly involved in this project now.”  Beri believes that future is digital in the world of entertainment.  Cinema theatres may soon become a thing of the past and, for this, one can be based anywhere.