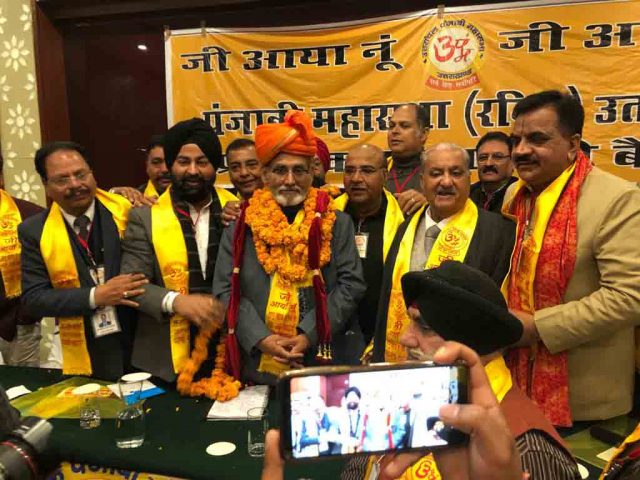 Dehradun, 2 Feb: Rajiv Ghai was unanimously elected State President of the ‘Uttaranchal Punjabi Mahasabha’ at a function held here today. Participants had come from across the state and Ghai’s name was proposed during the meeting, which was unanimously accepted.
During the executive meeting, State General Secretary Sunil Kheda gave a brief account of the activities of the Mahasabha and stressed that it had always been a democratic organisation. Kumaon in-charge Narendra Arora submitted an account statement of the organisation’s finances in the past year. Officials from 18 of the 20 units of Punjabi Mahasabha were present at the event.
Proceeding further, patrons of the Mahasabha and MLA Rajkumar Thukral were nominated as Election Officers for the election of the State President. While Rajiv Ghai’s name was proposed by S Anand, no one else filed the nomination. He was thus elected unopposed as State Chief of the Uttaranchal Punjabi Mahasabha.
The office bearers of 18 out of 20 units and seven members of the quorum committee elected the state president of Uttaranchal Punjabi Mahasabha with a full majority and unanimous vote.
During this time, all the officials welcomed Rajiv Ghai and wished him a bright future. Ghai thanked everyone and declared he would dedicate his whole life to the uplift of Punjabi society and thanked the entire community for placing its trust in him. MLA Rajkumar Thukral, SP Kochhar, GS Anand, Jagdish Pahwa, Sunil Khera, Ashwin Chhabra, Narendra Arora, Devendra Singh ‘Monti’, Amit Sachdeva, VVK Tuli, Girish Bakshi, AMK Sood, Dilbag, JS Bali, Kharbanda, Jasbir Singh, Dimpy Oberoi, Sanjeev Grover, Rajkumar Gawa, Harish Jalhotra, Rajkumar Futela, Ashish Chhabra, Pankaj Kalra, Seva Singh Matharu, Naresh Chhabra, Gurmeet Singh, Dr Kakkar, Amarjeet Singh, Amarjit Singh Kukreja, members of Punjabi society from all over the state including Gurnam Singh, Vijender Pal Singh, Narendra Singh Sethi and Anil Khurana were present.