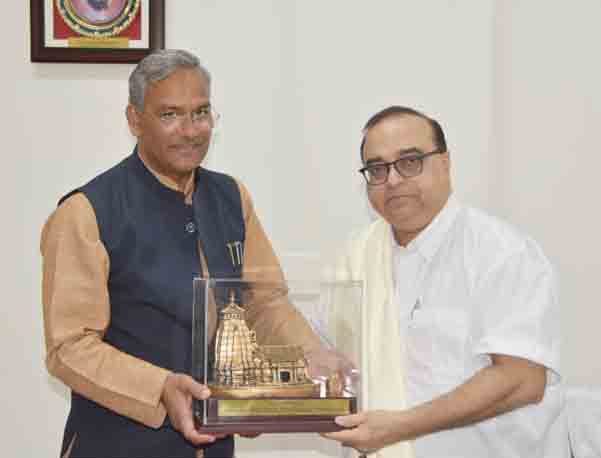 DEHRADUN, 4 Dec: Bollywood film producer and director Rajkumar Santoshi will shoot his forthcoming feature film on the India-Pakistan Partition in Uttarakhand. The shooting of the movie will begin in May 2019. Apart from this, he will shoot another film in Uttarakhand. Santoshi has given the Chief Minister a proposal to open a film studio in Dehradun or some adjoining area.
During a detailed discussion with Chief Minister TS Rawat at his official residence on Tuesday, Santoshi said that Uttarakhand, which is rich in natural beauty, could open the world market for shooting movies and there is an immense variety of locations for film shooting in the state.
There are many unexplored places with natural beauty that are yet to be captured by the cameras of the filmmakers. On the proposal to set up a film studio in Dehradun or its vicinity, the Chief Minister issued instructions to the Secretary, Information, to undertake a field inspection for selection of appropriate land for the studio.
Rawat said that the State Government was promoting the shooting of films in Uttarakhand with a long-term professional approach and in mission mode. The film policy was being updated to encourage film production in the state. Soon, it would be brought before the Cabinet. He said that the state government was providing subsidies, facilities, other concessions and good law and order arrangements for film production. Along with that, the government was working to open a branch of the Indian Film and Television Institute (FTII) Pune in the state.
Secretary, Information, Dilip Jawalkar, Director General, Information, Deependra Kumar Chaudhary, Film Nodal Officer KS Chauhan, etc., were present on the occasion.

Garhwal Post has established itself as a credible, balanced and forward looking newspaper in India. Based in Uttarakhand, the daily is read by the aware, socially and culturally responsible, high-income elite of society.
Contact us: info@garhwalpost.in
dates for spring break 2022