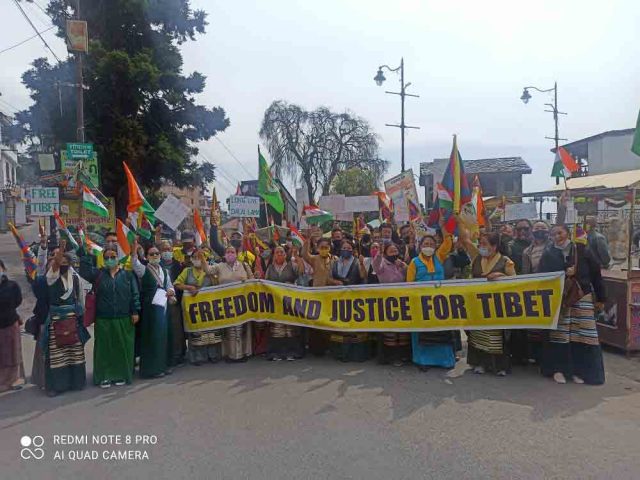 Mussoorie, 10 Mar: Slogans calling for an end to the Chinese occupation in Tibet filled the air today as scores of Tibetans living in exile here took out a rally to mark the 60th anniversary of the Tibetan uprising. The rally started from Happy Valley and passed along the Mall Road to Badoni Chowk and then back.
Expressing solidarity with the Tibetans, politicians and social activists gathered at the Happy Valley CST School here. Tibetan Women Association President Namgin Dolkar said, “The Tibetans have always led a peaceful struggle for their homeland and it is time that the international community takes note of the plight of Tibetans reeling under Chinese high-handedness.” She further said that the continued repression of Tibetans by the Chinese authorities is a matter of concern, so also efforts to obliterate the Tibetan cultural influences. She added, “Since March 2008, the Chinese Government has launched propaganda against the exiled Tibetan leader and Nobel Laureate, the Dalai Lama. But, we have continued with our peaceful struggle, even though acts of torture and incidents have risen in the past few years. The Chinese regime has launched a massive cover-up operation.” She said the March 10 anniversary had become symbolic for the Tibetans as the occasion was utilised to inform the Tibetans about developments, policies, course of action and future plans regarding the Tibet issue.
She declared, “We are also gathered here to remind ourselves to carry forward the non-violent struggle of the Tibetan people with great determination, courage and resolve. The rhetoric coming out of China today is that Tibetans have become their own masters. Fifty-seven years later, Tibetans inside Tibet are unequivocally demonstrating that they will not be controlled by Beijing, nor can they tolerate the extreme repression they have been forced to endure for the past six decades. China’s rule has created a crisis in occupied Tibet. Repressive policies and the severe crackdown have provoked an unprecedented wave of self-immolations by Tibetan monks, nuns, teenage students, mothers with children and respected community members. At least 136 Tibetans have sacrificed their lives for freedom and happiness to be returned to Tibet. It is with your support and energy that we can bring hope and change to the Tibetan people’s struggle, a human struggle for freedom. Tibetans are risking everything to ensure their message is heard and acted upon by the outside world. From every corner of the globe, no matter how small the gathering, we must respond in solidarity by standing up for Tibet.”