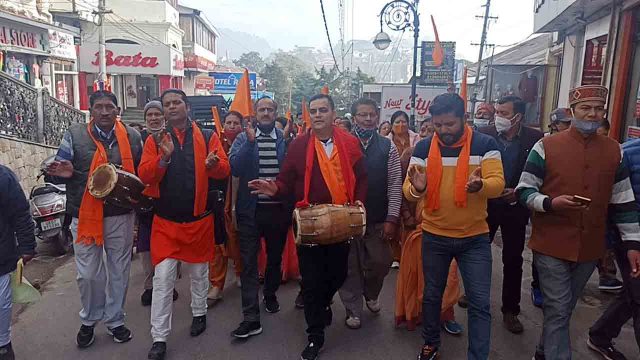 By Our Staff Reporter
Mussoorie: 17 Jan: The exercise of fund raising for the grand temple of Shri Ram in Ayodhya has picked up pace here. Efforts are being made to reach people through different events. A rally was organised by Hindu Jagran Manch and Vishwa Hindu Parishad and other organisations on Sunday with the aim of making people aware of the money collection campaign.
The rally started from the Landour Gurudwara, reached Gandhi Chowk via Picture Palace. Hundreds of Ram devotees on bikes and on foot appealed to the people for donations.
BJP Mussoorie President, former Municipal chairman OP Uniyal, Hindu Jagran Manch President Kuldeep Jadwan and Fund Raising Chairman Ramesh Jaiswal said that the grand temple of Shri Ram is to be constructed in Ayodhya, which required money. The cooperation of every Hindu of the country was being taken for this construction. He said that the money collection campaign was started on 15 January and would continue till 5 February.
Among those present on the occasion were Kushal Rana, Anil Godiyal, Mussoorie Mahila Morcha President Pushpa Padiyar, Anita Saxena, Anuj Tayal, Manoj Royal, Gambhir Panwar, Amit Bhatt, Dharampal Panwar, Anil Singh, Abhilash, Anita Dhanai, Kamal Sharma, Vaibhav Tayal, Ankush Nautiyal, Kunal and many others.