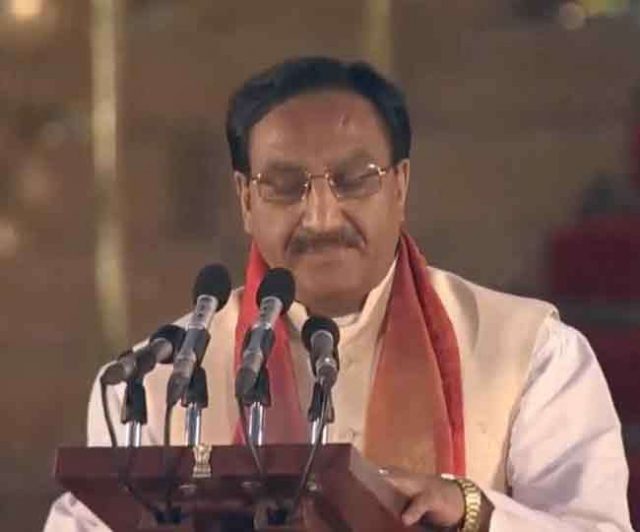 Dehradun, 30 May: Haridwar MP Dr Ramesh Pokhriyal ‘Nishank’ has found a place in the Modi Council of Ministers. In the earlier government, Uttarakhand’s Ajay Tamta was a Minister of State. Nishank is an ex-Chief Minister of Uttarakhand. He is one of the five MPs elected as part of BJP’s clean sweep of the state.
According to Nishank, he would work hard to realise PM Modi’s vision of development. He would be pleased to accept any responsibility reposed in him by the PM and the Party President.
Nishank was elected for the first time in 1991 to the UP State Assembly from Karnprayag. He was re-elected from the same constituency in 1993 and 1996. In 1997, he was made Hill Development Minister in the Kalyan Singh Government. In 1999, he was Culture Minister in the Ramprakash Gupta Government. After the formation of Uttarakhand, in 2000, he became its first Finance Minister. In 2007, he was Health Minister. He was Chief Minister from 2009 to 2011. He was the MLA from Doiwala in 2012, then contested the Haridwar Lok Sabha constituency in 2014 and won.
He is also a poet and author, having published 10 anthologies of poems, 12 collections of short stories, 10 novels, 2 travelogues, 3 books for children, and several others.

Garhwal Post has established itself as a credible, balanced and forward looking newspaper in India. Based in Uttarakhand, the daily is read by the aware, socially and culturally responsible, high-income elite of society.
Contact us: info@garhwalpost.in
dating site for big men