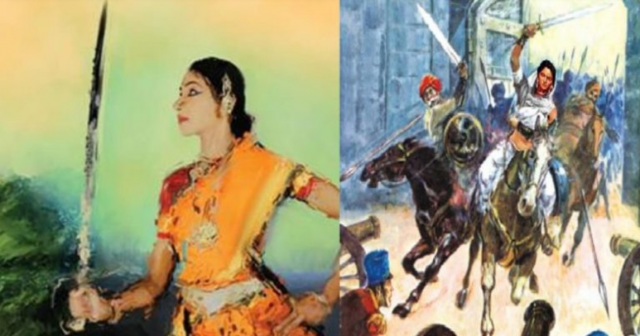 By Kulbhushan Kain
Amongst the many flaws in the teaching and writing of Indian history is the fact that we have been obsessed with the exploits of the invaders rather than the deeds of the brave defenders. This is a bit curious, unique and sad, because in most countries one finds that the defenders have been glorified even if they were defeated in war. The problem gets compounded in India by the fact that we tend to ignore the history of the regions far away from Delhi or the big cities. What is even a greater tragedy is the fact that the role of women in Indian history hardly (or if they do) finds passing mention in the textbooks in schools. There is a lot of talk on the empowerment of women these days– but I fear that it is confined to the drawing rooms of the elites in the big cities. To empower women without just paying lip service to the idea, we must begin by highlighting at the grassroots level the deeds of our brave women who lived in the past.

India has had outstanding women who strode the historical canvas like Colossus. True, we have heard of Rani Laxmibai of Jhansi and Razia Sultan. Their status has rightfully been elevated to that of celebrities – movies and songs have been made and sung about them.

However, how many of us have heard of the other brave women warriors? Maybe a few have heard of Rani Durgavati of Gondwana, Rani Karnavati of Chittor, or Rani Tarabaithe, indomitable queen of the Marathas. Hardly anyone of us have heard of Rani Abbakka Chowta of Tuluva, Rani Chennamma of Kittur, Rani Mangammal of Madurai, Rani Rudrama Devi of the Kakkatiya Dynasty, Rani Velu Nachiyar from Sivagangai, Bibi Sahib Kaur of Patiala, Chand Bibi of Bijapur….the list is exhaustive.

I am writing about an outstanding woman warrior from the region I hail – Garhwal. First, a bit about the history of Garhwal! The Garhwal Kingdom was founded in 823 by Kanak Pal. By 1358, the ruler Ajay Pal had expanded its territories by capturing the 52 “Garhs”, (forts, some historians trace the name of “Garh”wal to the capture of these forts) with the capital at Devalgarh not far from Srinagar, where it was later shifted to, by the dynamic ruler Mahipat Singh who ascended the throne in 1621.

Rani Karnavati was a brave woman warrior who not only defended her kingdom from the neighboring chieftains of Kumaon, Sirmour and Tibet – but also against the mighty Emperor Shah Jahan and, later, his successors. Garhwal was eyed because it had mines of silver, copper and gold. According to an English traveler, William Finch, the king dined off solid gold plates!!

The richness of Garhwal brought it into conflict with Shah Jahan, the Mughal Emperor, in 1640.

Shah Jahan sent a huge contingent of troops numbering 30,000 under General Najabat Khan. Very soon, they were knocking on the frontiers of the Garhwal Kingdom near what is today Rishikesh.

Rani Karnavati could have sued for peace by buying off the Mughals and becoming a dummy independent kingdom.
But she chose to fight!!!
According to Manucci, an Italian traveller who has written about the war, the Rani allowed the forces of Najabat Khan to advance and penetrate into the mountains up to a distance, after which she closed the roads from the way they came!! They could not go back and they did not know the mountainous terrain well enough to advance forward quickly. The spider had drawn the fly into its web.

Finding his forces in a hopeless position – the General sued for peace. Rani Karnavati could have killed all of them, but her demand was different. She told Najabat Khan that his forces would be spared if they cut their noses and left them behind!! The soldiers had no choice!

Why did she ask them to cut their noses? This practice has been a means of punishment since times immemorial. In the Ramayana, Laxman cut off the nose of Shurpanakha and “naak katanaa” is still used colloquially to express humiliation!

Queen Karnavati became famous as “Nak Kati Rani”! The above incident is not only written about by Mannnuci but by chroniclers like Bernier, Tavernier and Shah Nawaz Khan.

Rani Karnavati of Garhwal was not just a warrior queen. She was a visionary who is credited with building monuments at Navada in Dehradun district, constructing the Rajpur Canal (the earliest of all Dehradun Canals) and of founding Karanpur, which was then a village in Dehradun.

There is no doubt that Rani Karnavati was one of bravest women in Indian history. Sadly, hardly anyone knows about her. It’s time people who clink glasses and say “cheers” on listening about her exploits do something so that the younger generations can seek inspiration from a queen who was extraordinarily brave.

If we don’t learn from history – we will keep repeating our mistakes.

(Kulbhushan Kain is an award winning educationist
with more than 4 decades of working in schools in
India and abroad. He is a prolific writer who loves
cricket, travelling and cooking. He can be reached
at kulbhushan.kain@gmail.com)