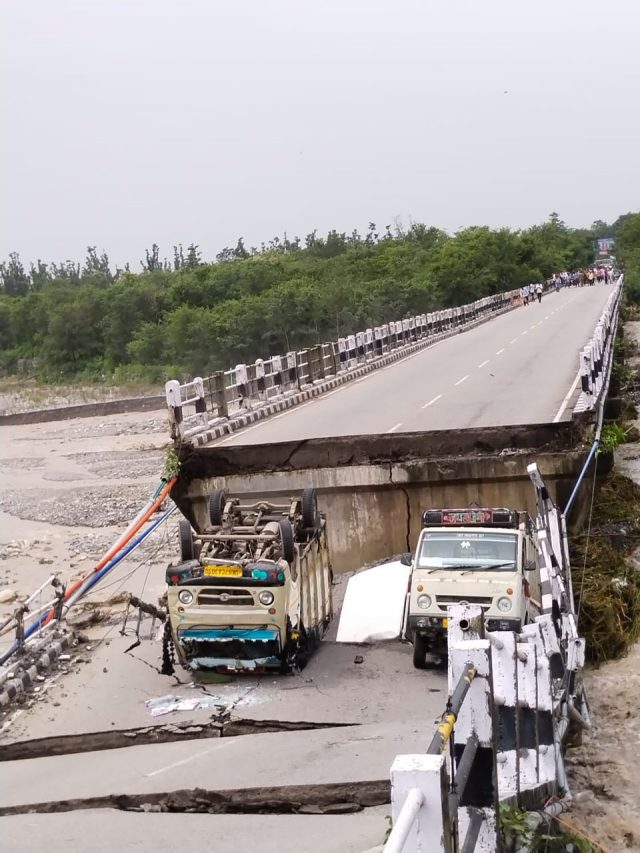 By Our Staff Reporter
Dehradun, 27 Aug: An old bridge near Ranipokhari village on the Dehradun-Rishikesh Road over River Jakhan collapsed at around noon today as rains continued to lash Uttarakhand and the Dehradun Valley, in particular. The bridge was a long bridge and the mid part collapsed today even as many vehicles were passing over it. The bridge collapse was captured live on video which has gone viral on social media as well as on mainstream news channels. Several vehicles including a truck crashed into the river when the bridge collapsed and many vehicles were stranded.
PWD Minister Satpal Maharaj has ordered an inquiry into the collapse of the bridge. He has directed the PWD Chief Engineer, Hari Om Sharma, to not only conduct a departmental inquiry in this regard but also strict monitoring of all the bridges in the state, particularly the old ones.
Meanwhile, the traffic between Dehradun and Rishikesh has been diverted on to the Nepali Farm route.
Chief Minister Pushkar Singh Dhami also took note of the incident and ordered an inquiry into the bridge collapse.
As per eye witnesses, two spans of the 57 year old bridge crumbled because of erosion caused by rapid flow of water in the River Jakhan. The erosion led to collapse of the pillars first and then the bridge itself. There was heavy vehicular movement on the bridge at the time of the incident. Three four-wheelers and one two-wheeler passing over the affected part of the bridge fell into the water. Two youths in a vehicle suffered injuries. Fortunately, however, no casualty was reported.
Heavy downpour in the Dehradun Valley over past 72 hours has resulted in landslides at many places in the district. As per the reports, the Maldevta-Sahastradhara Link Road in Raipur Block also caved in. Following the road collapse, water from the river washed away several metres of that stretch of road. In Vikasnagar Block, also, landslides and road blockages have been reported in the past 24 hours. Uttarakhand has been witnessing heavy downpour for the past three-four days. The Rishikesh-Devprayag, Rishikesh-Tehri and Dehradun-Mussoorie roads have been closed due to landslides caused by heavy rainfall. National Highway 58 has also been closed from Tapovan to Maletha due to heavy rainfall in the area, according to the Tehri-Garhwal district authorities.
The Uttarakhand Police have urged people to avoid travelling in the hills till the weather becomes normal. Meanwhile, the weather department has issued a warning predicting heavy rain in Uttarakhand. According to the State meteorological centre, heavy rains and lightning are likely to occur in Nainital, Champawat, Udham Singh Nagar, Bageshwar and Pithoragarh districts over the next three to four days.