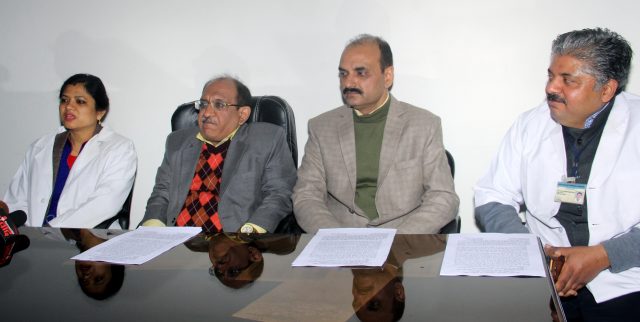 By OUR STAFF REPORTER
DEHRADUN, 11 Feb: Doctors of the Surgery Department of Shri Mahant Indiresh Hospital have operated on a ‘rarest of the rare’ case. The internal organs of this patient were exactly opposite to those of normal humans. The heart, spleen, liver, gall bladder, stomach and other intrinsic structure was located exactly opposite to what is normal in humans. The female patient was not aware of this fact before the operation at Shri Mahant Indiresh Hospital. The patient’s gall bladder was removed via the laparoscopic method. According to world literature, only 20 such patients have been operated on via the laparoscopic method after presenting with gall stone disease. There is no earlier mention of such a case in Uttarakhand.
This information was provided by Dr Vinay Rai, Medical Superintendent of Shri Mahant Indiresh Hospital.
Sushila Devi (44 years), a resident of village Daudbasi, Haridwar, was complaining of indigestion and pain in the left side of the abdomen. Under ordinary circumstances, the patient suffers from pain in the right side of the stomach due to gall stones. The examination did not reveal that the formation of the organs of her body were exactly opposite. Ordinary surgeons are not capable of operating on such cases. For such operations, a highly experienced team of laparoscopic surgeons with a modern set up is required. This extremely complicated and difficult surgery was carried out by Dr Madhulata Rana under the leadership of Dr Alok Vardhan Mathur. The patient was diagnosed with ‘Situs Inversus Totallis’ disease. The gall bladder of the patient was removed successfully via Laparoscopic Cholecytectomy in the surgery that lasted for around one hour. The patient is healthy after the operation and has been discharged from the hospital.
A Press Conference was addressed on this subject by Medical Superintendent Dr Vinay Rai; HOD, Department of Surgery, Dr RK Verma, Surgeon Dr Madhu Lata Rana, etc.
They said that observing the formation of the body of such patients is just like seeing an image in the mirror. That’s why such operations are very challenging and complicated. Just as, in India, people are used to driving on the right hand side steering, but if all of a sudden they had to drive on the left side, then it would pose a serious challenge.

Garhwal Post has established itself as a credible, balanced and forward looking newspaper in India. Based in Uttarakhand, the daily is read by the aware, socially and culturally responsible, high-income elite of society.
Contact us: info@garhwalpost.in
https://garhwalpost.in/kiev-dating-agency/ uk mature dating sites