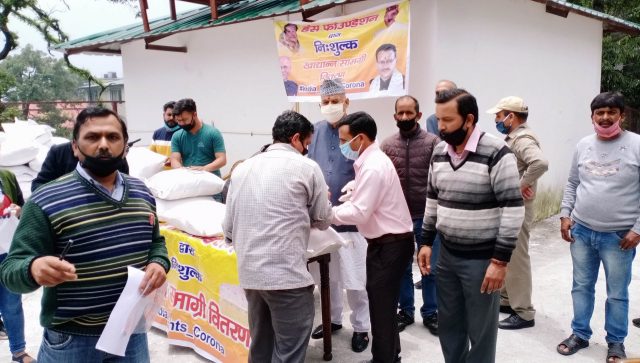 MUSSOORIE, 3 Jul: Ration was distributed to about 900 people in Mussoorie by MLA Ganesh Joshi, today.
Joshi provided the ration kits to street vendors and hotel workers, and promised them all possible help. On this occasion, social distancing was enforced by the police and administration. Mussoorie MLA Ganesh Joshi said that, with the help of Mata Mangla and Bhole Maharaj, the founders of Hans Foundation, rations were being distributed among the poor people in his constituency.
He recalled that, during the lockdown, thousands of people had been helped by providing ration and cooked food through the significant contribution of BJP workers. He said that the Bharatiya Janata Party was helping people by following the policy of “Jaha Kaam Waha Hum”.
On the occasion, he said that the Congress party was trying to malign the Trivendra Singh Rawat by making unwarranted allegations. He emphasised that Congress had lost the people’s trust, so it was conspiring against the government.
He said that the opposition constantly criticised Prime Minister Narendra Modi but, today, it was he who was with the troops in Ladakh to boost their morale. He claimed the Modi Government would respond powerfully against China.
Present on the occasion were SDM Premlal, Mussoorie Police in-Charge Devendra Aswal, SI Suraj Kandari, BJP Mussoorie President Mohan Petwal, Kushal Rana, Cantonment Vice President Badal Prakash, Arvind Semwal, Ramesh Khanduri, Gambhir Panwar, Sapna Sharma, Anil Singh, Sumit Bhandari, Ajay Sodiyal, Mukesh Dhanai and others.