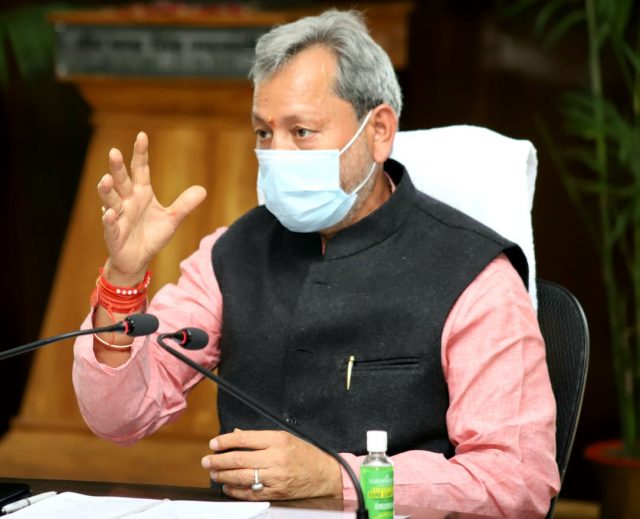 By Our Staff Reporter
Dehradun, 24 Apr: Chief Minister, Tirath Singh Rawat, today chaired a meeting to review the Covid pandemic situation in Uttarakhand. The meeting was held at the Secretariat and Rawat directed the officials to ensure  strict action  against those engaged in black marketing of essential medicines and oxygen used in treatment of serious cases of Covid infection. He said that no laxity would be tolerated in this regard. He also said that the decisions taken in respect of the Covid management be strictly implemented.
The CM also chaired an all party meeting today, where he said that there was no shortage of oxygen in the state. The Sports College Covid Center has been augmented by 500 beds. 100 beds have also been arranged in the Coronation Hospotal. At Haldwani Medical College, arrangements had been made to reserve 75 percent beds in five private hospitals. Hotels are also being authorised to reserve space for Covid patients. Apart from oxygen being made available from Rudrapur, Selaqui, Roorkee, its availability is also being ensured from outside the state. Testing has been increased in the state, and more testing is being done daily in the state than in other states. The Chief Minister said that effective efforts were also being made to break the chain of Corona virus. Government offices have been closed for three days, further arrangements were being made to keep them closed for another three days. Instructions have been given to keep the rest of the establishments except the shops of essential commodities closed after 2 pm. Instructions have been given to the police to take action against those not wearing masks.
Earlier, reminding the officials that from 1 May onwards, Corona vaccination campaign would be upgraded to allow all above 18 years of age to be vaccinated, he insisted that all preparations be made in advance to deal with the challenge.  Further vaccination be carried out adopting a camp mode approach and ensuring that the Covid protocol was strictly adhered to while undertaking the vaccination drive right up to the village level and that sanitisation be carried out everywhere even at the Panchayat level on a regular basis. The Chief Minister said that strict checking of those coming from outside the state be carried out at the state borders and no one be allowed entry without a negative RTPCR report. Registrations as mandated for those coming to the state be also be fully implemented even for migrants returning to the state who ought to be sent directly to their home and placed in home isolation on arrival.
Rawat said that in order to ensure home quarantine for the migrants returning to their villages, cooperation of Village pradhans be sought. For this, the village heads would have to be provided adequate funds. Police officials ought to assist the village pradhans in this task, Rawat asserted. The Chief Minister directed the officials to ensure that he hospitals provided with Remdesivir publicly display the quantity available and the prices of Remdesivir.  The CM also directed that a plan be chalked out for Covid management for next 15 days in the state and accordingly, arrangements be made for essential medicines, arrangements of oxygen, ICU beds, etc. He added that Oxygen supply chain management be given top priority and a public awareness campaign be carried out in this respect and that the public be well informed about the care that could be taken during the home isolation of the infected persons. He added that an effective central control room be managed from where the people could get information about beds available in different hospitals and about the availability of the essential medicines. The Chief Minister said that special attention be paid to the arrangements at Doon Hospital. Medicines should be made available as soon as the sample was collected of all suspected cases of infection. He also directed adequate deployment of police force in the hospitals.
Minister of State for Disaster Management Dhan Singh Rawat, Additional Chief Secretary Radha Ratuli, DGP Ashok Kumar, Secretaries Amit Negi, Nitesh Jha, Shailesh Bagoli, Pankaj Kumar Pandey, along with senior officials and District Magistrates were present in the video conference.