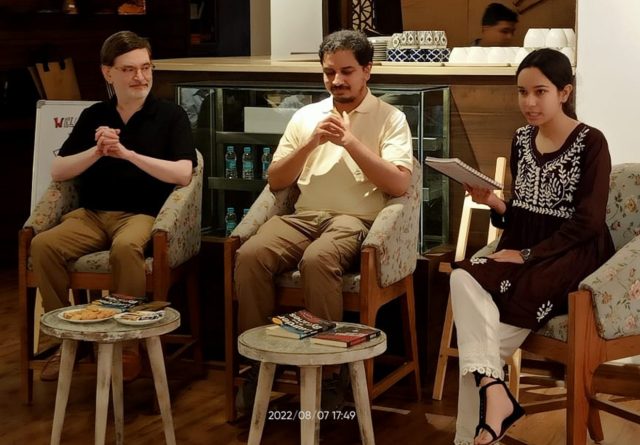 The seventh edition of ‘Authors from the Valley’ at VoW Café hosted Dehradun’s own Aloke Lal and Maanas Lal who discussed their latest bestseller “Murder in the Bylanes: Life and Death in a Divided City” set in Kanpur in the early nineties particularly in the aftermath of Babri Mosque demolition. Aloke Lal, a former Director General of Police in Uttarakhand was posted in Kanpur in undivided Uttar Pradesh and had been a personal witness to the tensions that prevailed in the city after the demolition of the Babri Mosque in December 1992 in Ayodhya. On the other hand, the co-author Maanas Lal, who happens to be son of Aloke Lal was born in 1990 and was a small child then. However, having collaborated with his father Aloke Lal on his previous book, ‘The Barabanki Narcos’ as a proof reader, Maanas was invited to co-author the latest book by his father. It is not usual to find a father and son team collaborating on a book as coauthors, that takes up a subject as complex as the social divide and the faultiness prevailing in a particular city in the aftermath of a special incident.

At the VoW Café event held on Sunday evening, Aloke and Maanas together touched upon their upcoming books, their publishers and how they choose which ones have to be co-written. Talking about co-authoring Aloke Lal said, “Like other partnerships this coming together of father and son has its up and down moments.” Adding, “My colleague is a stickler for perfection and brooks no mistakes, minor or even imperceptible ones. We resolve our differences amicably and quickly. It’s a pleasure to work with Maanas. This child is a good father of man! Maanas agrees with his father, “The journey has been largely smooth. While there are frequent disagreements about various aspects of the writing process, the final result is a stronger relationship. We’re good at understanding each other’s weaknesses and that makes it a much rewarding partnership.” The father and son shared insights into Aloke Lal’s debut book ‘The Barabanki Narcos’ screen adaptation and a web series based on the book to be launched towards the end of the year.

The session was moderated by Shruti Bali, a part of the DAV Mantrana Society, who had read the book and asked certain questions about the book. This was followed by an interactive session. He also recounted an incident which also finds mention in the book that happened during curfew in the city. He recalled that due to curfew in Lucknow, he could not catch up his sleep and during patrolling, he found one shop of a tailor with half down shutter and inside the tailor was busy with his work. He said that he lost his temper for a while and was bit harsh on the tailor who was probably busy in his shop because he had to do the stitching clothes for an upcoming wedding. Later, he realised his mistake and once the curfew was relaxed, he went again to the shop and ordered stitching of a Kurta Pyjama from him.

In response to a question, Aloke Lal claimed that it was the politicians who were behind the social divide and differences between the two largest communities in India, namely the Hindus and the Muslims which otherwise would have co-existed peacefully. He also dismissed the idea of Two Nation Theory as a bogus theory and went on to quote from his book which mentions, “Ganga does not belong to one particular religion but to all”. In response to another question, he also sought to disagree with the idea of renaming places or cities. “What had changed for Allahabad after its name was changed to Prayagraj?”, he sought to assert!

Talking about ‘Murder in the Bylanes: Life and Death in a Divided City’ Festival Director Sanjeev Chopra stated, “The book is not only a gripping page turner, it also holds important lessons on how to build trust and confidence. Very valuable addition to the corpus of books on law and order administration, urban policing and crime fiction!”

Over the past seven months, the VoW Café on Sahastradhara Road has hosted several authors, most of them from Dehradun, including historian Pradeep Singh, distinguished poet and Padma Awardee Leela Dhar Jagudi, cultural curator Anjali Nauriyal, veteran author Raj Kanwar, IFS officer Sameer Sinha, Ex DGP Anil Raturi and the sessions have been attended by a growing eclectic group, from patrons to volunteers of Valley of Words.

Garhwal Post has established itself as a credible, balanced and forward looking newspaper in India. Based in Uttarakhand, the daily is read by the aware, socially and culturally responsible, high-income elite of society.
Contact us: info@garhwalpost.in
six months relationship https://garhwalpost.in/skegness-dating/