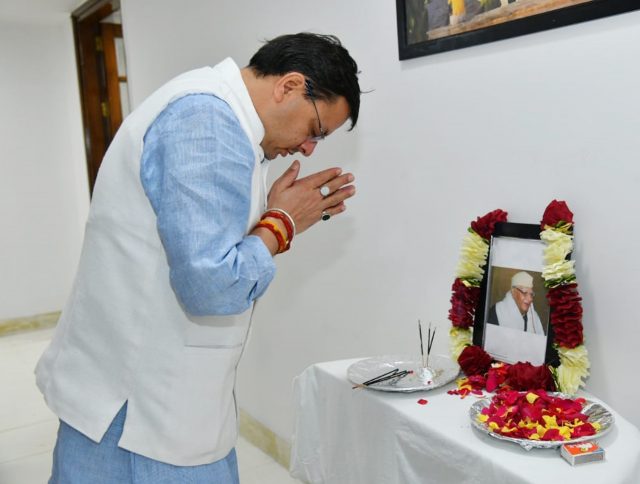 Dehradun, 18 Oct: Chief Minister Pushkar Singh Dhami has attempted a political masterstroke by announcing that the Pantnagar Industrial Area would be named after former Chief Minister, the late Narayan Dutt Tiwari. The occasion was Tiwari’s birth as well as death anniversary. It was under the Chief Ministership of ND Tiwari, the first elected CM of Uttarakhand, that the foundation was laid of industrialisation in Uttarakhand. Tiwari was a Congress leader but he is widely respected across the political spectrum and is also known as Vikas Purush.
Though the announcement came on the eve of the birth and death anniversaries of Tiwari, it was today that the announcement witnessed political reactions. Congress leader and party spokesman, Mathura Dutt Joshi claimed that the BJP had made the announcement with a political objective and not out of a genuine respect for Tiwari. Meanwhile, the CM claimed that Tiwari was a visionary leader who was never restricted by narrow political boundaries and therefore it was appropriate that Pantnagar Industrial Estate be named after him. Dhami said that the BJP leadership believed in putting the nation first and, therefore, never hesitated to rise about party politics. Naming the Pantnagar Industrial Estate after Tiwari was aimed at showing gratitude towards the great leader.
Strangely, the announcement to name the Pantnagar industrial area after Tiwari appears to have made the Congress leadership rather uncomfortable. It is worth noting that, currently the tallest leader in the Uttarakhand Congress, Harish Rawat, is known to have seen Tiwari as an arch political rival. Not only this, even after Tiwari’s passing away, the Congress leaders who had been close to Tiwari have never had a comfortable political relationship with Rawat. Whether it was the late Indira Hridayesh, Vijay Bahuguna or Nav Prabhat, none of them had comfortable relations with Harish Rawat. Tiwari still commands a huge following in the Kumaon region and it is also a fact that the political ‘Karmabhumi’ of Chief Minister Dhami is also the Terai region, as was the case with Tiwari. Whether this announcement can really bring any political fruit for Dhami remains to be seen; though undoubtedly, he has tried to project himself as a leader who can rise above party politics.
This move is being seen as a clever political move by political commentators. Tiwari was a big face of inclusive politics, and he is credited with the industrial development in Uttarakhand, especially in Udham Singh Nagar, Haridwar and Dehradun. It was Tiwari’s acumen and political clout that former Prime Minister Atal Bihari Vajpayee had accepted his request and granted an industrial package to Uttarakhand. Tiwari laid the foundation of industrial development in the newly created Uttarakhand through his personal efforts and contacts with the corporate world.