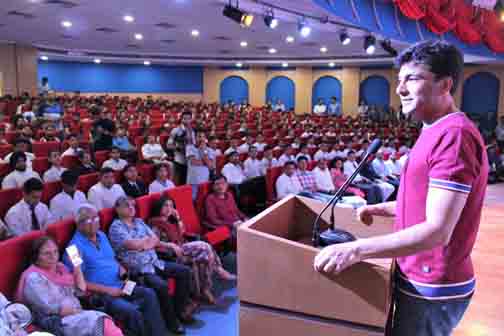 By OUR STAFF REPORTER
DEHRADUN, 20 Jul: Michelin star chef, Vikash Khanna, said that it the duty of every Indian to pay the debt of his soil. While interacting with students during a live session in Graphic Era Hill University, the world famous chef, writer and film maker said that the success story of any successful person is incomplete until he  does something for his country and his alma mater. On this special occasion Khanna also inaugurated a Mango festival organized in Graphic Era Deemed University.
Khanna said that the most important role in the life of any successful person is played by his alma mater which lays the foundation of his professional life. Even after collecting several degrees from abroad he cannot pay the debt of his alma mater and teachers. He asked the students of Graphic Era Deemed and Graphic Era Hill University to take an oath to do something for there alma mater after succeeding in life.
Any university is known because of its alumni and the alumni who do something for their institution become immortal for generations to come. “I have also tried to do my bit by making a museum of antique indian utensils in my alma mater”, he said.
He added that you will be meeting several veterans the moment you step in the professional world. Rather than getting intimidated, you should be curious and try to learn from them. The journey of your success story starts from where you begin. Those who want to become entrepreneurs should be ready to take risks in life. Devotion towards one’s work can transform an ordinary person to an exceptionally talented one.
The judge of Star Plus Master Chef India show was seen surrounded by students, for selfies and his autographs on his book Wholesome Grain.
The Hotel Management department of Graphic Era Deemed University had organized a Mango festival on this occasion. Khanna inaugurated the event and also interacted with the students.
Students had prepared delectable delicacies like Mango fried fish, Mango saffron rice, tamarind Mango chicken salsa and mango curry chicken for the festival.
Vice chancellor, Graphic Era Hill University Prof. (Dr.) Sanjay Jasola, Director Dr. Ajay Kumar, Amar Dabral and Rahul Chandel remained present on the occasion. The event was coordinated by Sahib Sablok.

Garhwal Post has established itself as a credible, balanced and forward looking newspaper in India. Based in Uttarakhand, the daily is read by the aware, socially and culturally responsible, high-income elite of society.
Contact us: info@garhwalpost.in
https://garhwalpost.in/billionaire-dating/ dating apps for gay teens best dating apps in brisbane