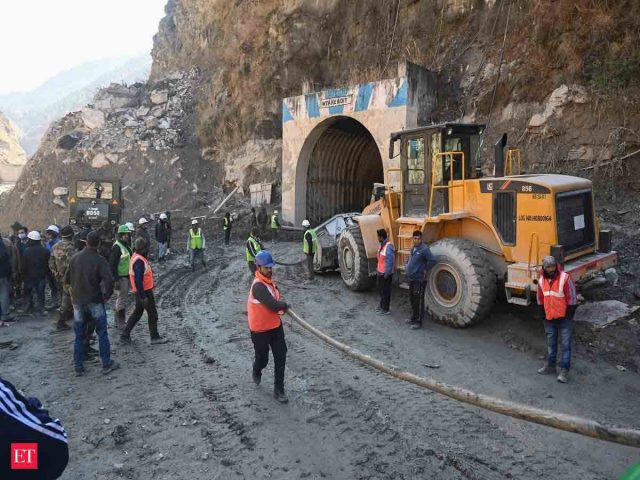 By Our Staff Reporter
Dehradun, 11 Feb: Due to reports of rise in water level in the Rishiganga upstream, rescue operations were briefly halted at the NTPC tunnel in Tapovan, today. As many as 35 workers are trapped in the tunnel after the recent deluge.
However, after some hours of halt, the rescue operation resumed again. It is learnt that the rescue team is around 25 to 30 metres away from the place where the workers are trapped. The rescue operation was halted this afternoon as the water level had risen after which an alert was sounded and the rescue teams were moved out of the site to safer places away from the tunnel.
District Magistrate, Chamoli, Swati Bhadoria, Army and ITBP officials were at the rescue site when the incident occurred. As the water level receded, the rescue teams were called again and they resumed their operations after a halt of around one and a half hours.
Meanwhile, a Chinook Helicopter of the Air Force landed in Chamoli today with more equipment as well as personnel from NDRF, SDRF and BRO to boost the rescue operations. An Air Force team visited the disaster-ridden glacier and 10 villages to take stock of the situation. The rescue teams were now also engaged in vertical drilling and removal of debris in an attempt to reach the trapped persons as fast as possible.
IANS adds: Earlier, the rescue workers began drilling a tunnel vertically downward on Thursday in what is seen as a new strategy to save 25-35 trapped people inside a tunnel of the NTPC’s Tapovan hydel project.
“We are doing both excavation work and drilling the tunnel in our efforts to reach the trapped people,” said DIG Nilesh Anand Bharne, who is also spokesperson of the Uttarakhand police.
Ever since the excavation and digging work began inside the tunnel, the rescuers had been working on multi-pronged strategies in their desperate bid to open the tunnel which was blocked by the Sunday morning deluge.
The rescuers have also used remote sensing technologies for geographical mapping of the tunnel. “We have also used geographical mapping of the disaster-hit tunnel in the operation,” said Ridhim Agarwal, DIG SDRF.
The rescue work slowed down on Tuesday due to the presence of heavy silt inside a tunnel of the disaster-hit Tapovan hydel project in Chamoli district of Uttarakhand. The DGP Ashok Kumar has stated that all possibilities will be explored to save the lives of the trapped people.
After days of digging and excavation works, jawans of army, ITBP, NDRF and SDRF, who are engaged in the rescue works, had managed open a sizeable portion of the tunnel. But the presence of heavy silt and sludge inside the tunnel slowed down the rescue work, top government officials admitted. Rescuers also consulted NTPC officials to understand the complicated design of the tunnel.
However, there is still no contact with the trapped people inside.
The state government has stated that nearly 200 people were missing after the disaster and 34 bodies have been recovered, of which 9 have been identified.