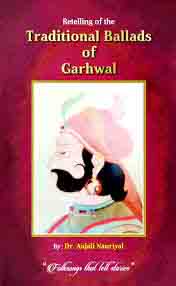 (By Anjali Nauriyal. Nominated in the category of English Non- Fiction for the REC-VoW Book Awards, 2019)

Excerpts from the interview with Anjali Nauriyal 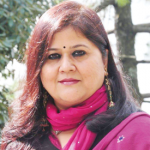 You have researched a great deal on Uttarakhandi folk and your work restoring and retelling their stories is commendable. Could you tell us about that experience? What perks and perils does one encounter during such a journey?
I wrote these stories as many as 18 years ago. I wish I had got them printed early. For those many years, I kept wondering who would be interested in them. But as a proud Uttarakhandi, I valued them within the core of my heart and knew I had done something special. I recorded songs of these traditional singers called Baadis. I sat with them endlessly, listened to their songs and extracted the stories out of them.
As a student and teacher of literature, I felt a natural affinity to this traditional art form that contains within its fold the ingenuity and the truth of our people. These narratives have come down to us from shared humanity. They have value from several perspectives. Today, I adore them and want to go full throttle in preserving them, empowered with innovative tools if I may.
If one is committed to art forms that bear testimony to the past, the special perk that follows is a sense of artistic attainment. These tales connect us to our roots. I had plunged into this territory a novice and ended up becoming committed to this basic form of expression of days of yore. It is so fascinating to know that these songs represent the rudimentary culture of our past generations as well as of contemporary generations. They contain memories that can be revisited. Isn’t it enthralling to know that lots of information relating to our particular social milieu is kept alive in this special genre of oral tradition? They are a consequence of the thought processes of our ancestors. They are testimony of our past.

What perils can be attached to this kind of study?
There are obstacles for sure, such as distortions creeping in with each passing generation. Human memory can cause major upheavals. Also its not easy to keep preserve the recordings in cassettes. Data storage is a major issue. Also, maybe the Chinese Whisper syndrome!

Folklore and oral histories are an authentic, alternate form of storytelling. Stories also seem to evolve over time. Do you feel that if these stories had been documented in the past in the conventional non-oral tradition, would they have told a different story?
There is always an element of truth in folklore. Only variations creep in with the passing of time. Early documentation sure helps in perpetuation of narratives. But, personally I love the play of imagination and altering versions. That sure indicates the power of creativity.

Folklores by Baadi are considered to be lewd. Is this a misconception or is there any truth lurking behind this statement?
There have been reports of bawdy behaviour by individual singers. But the tales by themselves are not raunchy. Baadis have two sides to their performances; one is the private and the other the public one. The private one has always remained shrouded in secrecy. It is mostly performed indoors in the houses of the well off.
Mostly their songs are romantic, and their subject matter includes love stories of Garhwali Casanovas, Radha and Krishna, and Jeeja and Saali (love between brother-in-law and sister-in-law). In its corrupt form, their singing has come to be identified with nudity and sex, with suggestions of prostitution.

Anjali Nauriyal has received several awards for her contribution to journalism including the GIAN Award for Grassroots Augmentation in 2005 by Mashelkar, Uma Shakti Samman 2009 for Exemplary Work and Popularity in the Field of Social Service through Journalism, Indian Medical Association Award for contribution to Society, Raj Rajeshwari Samman by PHD Chamber and Uttarakhand Government; Outstanding Journalist by Punjabi Sabha; Comrade Kamla Ram Nautiyal Sanstha Uttarkashi Samman, Chief Minister’s Award for Excellence; Garhwal Post Award for Excellence 2016, Pride of Uttarakhand by Doon Citizens’ Council, Uttarakhand Ratan by All India Conference of Intellectuals, Daughter of Uttarakhand by Garhwal Post, Media Federation of India Award, etc.
Currently, she is working with Garhwal Post as Features Editor. Her maiden book, titled ‘Retelling of the Folk Ballads of Garhwal’ has become a regional best seller.
For the complete interview, log onto www.valleyofwords.org