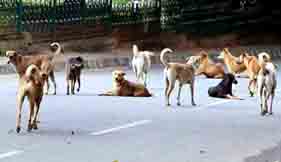 This is for all those people who write to me complaining about the dogs on the streets. They always start their emails by saying they are great animal lovers and they have dogs of their own BUT we must do something about the “dog menace” in order for them, their children, and their dogs, to move freely without encountering “junglees”, “strays”, “ pi-dogs”, etc.
While the government, and all the courts, have ordered sterilisation of all dogs by all municipalities and district administrations, in reality less than a tenth of the country is doing it. Lack of vets, lack of money and, the most important, is lack of vision. The dog sterilisation programme is controlled by the Ministry of Environment, who put out less than Rs 50 lakhs a year for it, instead of the Ministry for Health, which has been allocated more than Rs 300 crores. But the Ministry for Environment will not hand it over. And the Ministry for Health is not trying too hard because, as their secretary said to me, “Our job is not to sterilise dogs”. Since this would come under the heading of rabies control, I asked why they were killing mosquitoes since that was not their job. Because, that was the only way to bring malaria under control. Exactly. Sterilising and vaccinating dogs would remove rabies within 5 years.
It is difficult to educate bureaucrats, since the space where their brains should be is filled with ego and a limited logic that runs only on one narrow gauge track.
However, here is another way to deal with the dogs and cats on the road. Illegal breeders are breeding lakhs of pedigreed dogs who are unhealthy, inbred and found in every pet shop. It is now illegal for any pet shop to keep any animals without a registration, which is very strict, but our feet on the ground are so limited and so vulnerable to bribes that I am not sure how long it will take the authorities to apply the new laws.
So, here is what we can do:
America’s shelters have a kill policy. Abandoned animals in shelters are allowed to live 28 days and if they are not adopted, they are killed. Over the years, a large number of no-kill shelters have come up. But the dogs live in cages for the rest of their lives, unless they are adopted.
In 2017, California passed a law, A.B.485, that pet stores will only sell puppies, kittens and rabbits from shelters and rescue centres. Violators will be fined $ 500 and shut down. This effectively puts an end to commercial animal breeders and brokers, and to the terrible practice of illegal breeding. Just recently, we had to rescue 11 dogs in the backyard of a doctor in Thane. They were starved, on the verge of death, eating their own faeces, but each had given birth to any number of puppies who had been sold by the doctor with forged certificates as to their foreign pedigree.
The pet trade in America predictably protested saying that “it would jeopardise jobs”. (They were overruled). But, in India, the trade does not employ anyone. It is an illegal business which operates by taking a few dogs, tying them up, forcibly breeding them every six months and then putting them in illegal pet shops. It will put no one out of business.
Why not bring the same law into India? Almost every city now has an animal welfare group. Many of them have animal shelters. My shelter in Delhi, Sanjay Gandhi Animal Care Centre, gets a minimum of ten throwaways a day. People who have bought pedigreed dogs, kept them badly, made them sick, tied them up the whole day and made them ferocious, and then they come to the hospital, pretend they have come for medicine /treatment and then, when they think no one is looking, they run off, leaving the dog behind in an alien, diseased, unfriendly surrounding. We take Rs 15,000 for each abandoned animal but, in order not to pay, these people – who have paid far more in buying the dogs, will tie them to the gate or even throw them over the wall.
Most of the abandoned dogs are Pomeranians and Spitzes. The others are Labradors, and the huge woolly Swiss ones that were originally smuggled into India. And, of course, lots of Vodafone pugs. We put the dogs into a special enclosure, in full view of the hundreds of visitors who come, so that they can adopt them. Some get homes. Others waste away with broken hearts, and the terror of being in an uncomfortable enclosure with fifty other dogs, till they die. My sister takes the most damaged ones home, and she has 17 in her tiny house. I have 24. Once they recover and bounce back, we try and find homes for them.
So, if we made it compulsory for pet shops to only sell dogs and cats from shelters, we would be able to achieve two things: the abandoned foreign animals would find homes and the shelters would make a little money. The dogs/cats could be sterilised, vaccinated and made healthy before selling – unlike the pedigreed dogs/cats that come from breeders. They are sold without vaccinations and most of them die as puppies of distemper and parvo.
The other thing it would achieve is that pet shops will start selling the cutest Indian puppies supplied to them from shelters. No shelter will breed foreign dogs, so, in the absence of formal retail outlets, the breeding of foreign dogs will go down. People who want dogs will take Indian dogs. People who like buying dogs will buy them from shops.
Please start campaigning in your states for this. We can make the world a much kinder place if we push for the right things.
(To join the animal welfare movement contact gandhim@nic.in, www.peopleforanimalsindia.org)