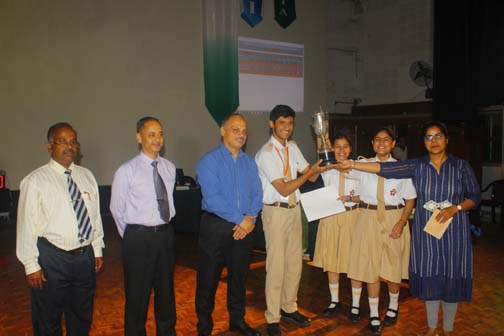 Dehradun, 24 Apr: The 26th All India RIMC Inter School Challenge Quiz was held at RIMC on Tuesday as part of ‘Festilitt 2019’. A total of 27 schools participated, out of which 11 were outstation teams, namely Pinegrove School, Kasauli, Sherwood College, Nainital, Mayo College Girls’ School, Ajmer, RKKGPS, Jodhpur, Vasant Valley, New Delhi, The Scindia School, Gwalior, LMGC, Lucknow, RMS, Ajmer, Wynberg Allen School, Mussoorie and Sainik School, Ghorakhal.
The Quiz was held in two phases. The Preliminary Round started with a bang with difficult questions to test the knowledge of the contestants. Out of the 27 schools which participated in the Preliminary Round, 6 teams were short-listed to compete for the Trophy, namely Summer Valley, St Joseph’s Academy, The Shemford School, Sainik School, Ghorakhal, RMS, Ajmer and RIMC. The final competition began with the Chief Guest’s arrival. Brig AK Sood, Commandant, Military Hospital, Dehradun, was the Chief Guest. Col Arun Thakur, CO, 41st Medium Regiment, was the Guest of Honour. Doon International School and Cambrian Hall tried their best to enter through ‘Wild Card’ gateway but could not make it. The Final Round of the Quiz was divided into 10 phases. After the long 10 rounds, the cadets of RIMC emerged victorious with 125 points. Being the host school the trophy was presented to the Runners Up, The Shemford School.
Brig AK Sood congratulated the Champions and appreciated the standard of the Quiz, complimenting the level of awareness among the young participants.
The event was coordinated by R Thamil Selven. Tayeba Khatoon and Dr Shyam were the Quiz Masters.
Col Vivek Sharma, Commandant, RIMC, expressed his gratitude to the Chief Guest and thanked all the schools for participating in the competition.
RIMC ‘Festilitt 2019’ is the literary festival which began on 22 April and will culminate on 25 April.
All India Inter School Hugh Catchpole English Debates, Kanshi Naresh Wag Vibhuti Hindi Debates and All India Inter School Challenge Quiz are being organised in this festival. The All India Inter School Hugh Catchpole English Debates began on 22 April and till now four teams have secured their position for the finals. The teams are St Joseph’s Academy, Dehradun, RIMC, Dehradun, Shri Ram School, New Delhi, and RKKDPS, Jodhpur.
Kanshi Naresh Wag Vibhuti All India Hindi Debates also began today. Around 16 teams from different parts of the country participated in the quarter finals. The Semifinal and Finals of the event would be organised tomorrow morning and evening, respectively.