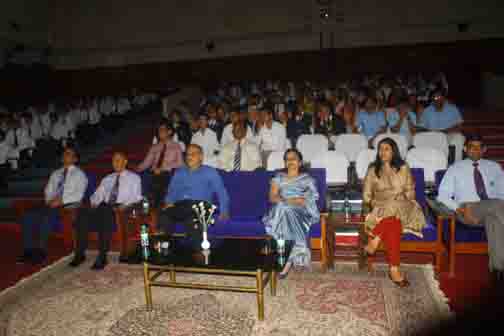 ‘FESTILITT 2019’
By OUR STAFF REPORTER
Dehradun, 25 Apr: The All India Hugh Catchpole English Debates 2019, were held from 22 to 24 April at the RIMC, in which 22 well-known schools from different corners of the country pulled out all the stops to eclipse one another through various rounds. The Rashtriya Indian Military College, Dehradun, RKKGPS, Jodhpur, The Shri Ram School, Delhi, and St. Joseph’s Academy, Dehradun, flexed their debating muscles in the finals at the Thimayya Auditorium on Wednesday evening. The topic was: ‘This House believes that technological advancement poses a greater threat than population growth does to the health of our planet’ and ‘Crony spiritualism is on the verge of becoming the biggest scourge to our democratic fabric’. The debates were held in RIMC customised format.
The Chief Guest at the Grand Finale was Dr Sanjeev Chopra, Director, LBSNAA, Mussoorie, and the other dignitaries present included Dr Rajendra Dobhal, Director, UCOST, Col Mahajan, Col Kapil Rana and Maj Jagdeep Kairon. The event saw an exceptional display of oratory skills backed by both lateral and horizontal thinking from the top four contenders, culminating in crowning the host school as the victors. Being the host school, the RIMC presented the trophy to the runners up, St. Joseph’s Academy, comprising Saloni Kathait, Payal Mehrotra and Suryansha Rawat.
The three-day debating jamboree got underway with the Preliminary Round Phase-1 on 22 April at various venues in the Modified Cambridge format in which 11 teams qualified for the quarter finals. The Preliminary Round Phase-2 was conducted among the teams that didn’t make it to the quarter finals, giving them another shot at victory and four more teams qualified for the quarter finals. Both the RIMC teams qualified for the quarter finals and Team B was pulled out to give others a chance.
The 14 teams fought tooth and nail and 7 teams qualified for the semi-finals on 23 April. The 7 losing teams were given another chance for the qualification with the ‘Turncoat Round’. Therefore, 8 teams made it to the semi-finals that included the four finalists mentioned above and LMGC, Lucknow, CJM, Dehradun, The Doon School and Wynberg Allen School, Mussoorie. Adir from The Shri Ram School was adjudged the Best Speaker and Sridip Mukherjee from Wynberg Allen, The Most Promising Speaker.
The Finals were judged by a panel of three judges, namely Dr Anju Bhatt, Alok Rawat and Maj Vani Ahlawat. The judges praised the oratory skills and the extraordinary confidence level shown by the students. Cdt Dhruv Dahiya (RIMC) was adjudged the best speaker and the second best speaker was Payal Mehrotra (St Joseph’s Academy). Kabir Beotra of The Shri Ram School was given the Commandant’s Special Prize.
Dr. Sanjeev Chopra, in his witty speech, complimented all the finalists and expressed his delight for three reasons: that he was not a participant, not the judge and also he wasn’t from the host school. Post his speech, Commandant Col Vivek Sharma, proposed the vote of thanks.
The event was coordinated by Rekha Negi.