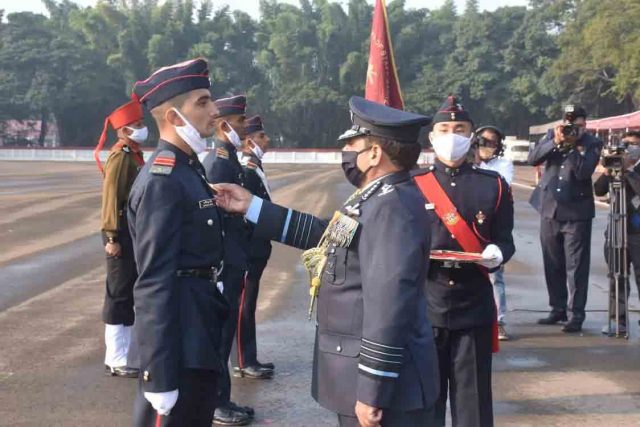 By OUR STAFF REPORTER
Dehradun, 9 Nov: It was a red-letter day on 7 November for the 139th Course of the National Defence Academy, during the Passing Out Parade in which ex-RIMC Cadets, Rimcollians, bagged all the top honours.
The Parade was reviewed by Air Chief Marshal Rakesh Kumar Singh Bhadauria, Chief of the Air Staff (CAS). The highlight of the Parade was that all the three top honours for the Cadets of the Passing Out Course for standing First, Second and Third in the order of merit were bagged by ex-RIMC Cadets. Battalion Cadet Captain Anirudh Singh won the President’s Gold Medal for standing First in the overall order of merit. Divisional Cadet Captain Somay Badola won the President’s Silver Medal for standing Second and Battalion Cadet Captain Anmol won the President’s Bronze Medal, coming Third. This is indeed a unique and rare event when ex-students of any school have bagged all the three top prizes at the NDA. This feat has been repeated once earlier by RIMC Cadets in the 80s.
The tally of awards bagged by ex-RIMC Cadets, which makes for a long list, is enviable. The awards bagged by Rimcollians in this Passing Out Parade include President’s Gold Medal – BCC Anirudh Singh; President’s Silver Medal – DCC Somya Badola; President’s Bronze Medal – BCC Anmol. Gold Medal – Best Army Cadet – BCC Anirudh Singh; Gold Medal – Best Naval Cadet – BCC Anmol; Silver Medal – Best in Riding – BCC Anmol; Silver Medal Best in Drill – BCC Anmol; Silver Medal – Best Sportsman of Passing Out Course – BCC Ajay Singh; Silver Medal – Best in Sailing – CQMS Ajay Joseph; Chief of Staff Trophy for max contribution to Jointsmanship – BCC Anirudh Singh.
Lt Gen CP Mohanty, GOC-IN-C, Southern Command, in an event hosted for the occasion on the eve of the POP at the Southern Command Headquarters, congratulated the proud awardees for their excellence and dedication. He urged them to continue and strive harder in order to serve the Nation, which they would as Commissioned Officers, shortly.
In a congratulatory message of gratitude to the Administrative Staff, Masters and the entire Support Staff, a legendary Old Boy of the RIMC, Air Chief Marshal NC Suri (Retd), hailed their persistent efforts on seeing all the Rimcollian awardees.
Overwhelmed with emotion, Mrs Badola, BCC Soumya Badola’s mother, accredited the entire RIMC Team that continues to nurture these young Cadets with discipline and values of the Indian Armed Forces.
Col Ajay Kumar, Commandant, RIMC, attributed this landslide success to the resolute hard work of the Cadets duly guided by the values imparted at the RIMC and the dedicated endeavours of the RIMC Administrative, Academic and Support Staff, who have steadfastly persisted in shaping the ‘Scholar Warrior’ Cadets as devoted ‘Sentinels of the Nation’.