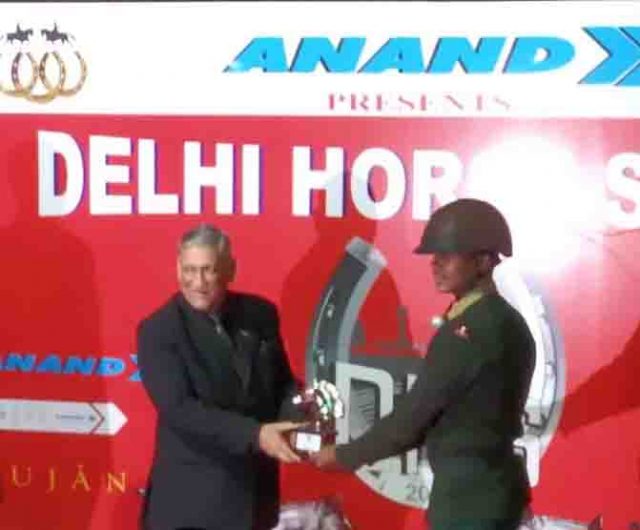 By OUR STAFF REPORTER
DEHRADUN, 9 Dec: Cdt Omkar Dalvi, a proud alumnus of RIMC currently leading the equestrian team at NDA, has clinched the coveted ‘The Best Young Rider Award’ at Delhi Horse Show. ‘Delhi Horse show’ is organized by The Equestrian Federation of India and Army Equestrian. He also bagged two team Silver Medals and a Bronze Medal in Young Rider Jumping.
He holds the coveted ‘Blazer’ in Horse Riding and Polo, presently in Sixth term at NDA.
Delhi Horse Show has been one of the most coveted contests in the country, organized since 1960. Contestants are the large number of Army Units, Defense Academies and other Civilian Horse Riders.
The National level Competition began on 01 December and will culminate on 12 December. This has enabled Indian riders to compete successfully, even at the international level, on India–bred horses, rather than expensive imports.
Cadet Omkar Dalvi is an alumnus of Rashtriya Indian Military College, Dehradun. His father, UP Dalvi is House Master at RIMC. Cadet Omkar Dalvi developed the flair for Horse Riding at RIMC itself.
Yesterday, in Junior Young Rider Knock out category, more than 40 riders took part, out of which 16 riders qualified for the final on the knock out basis. Cdt Omkar Dalvi cleared six jumps in a very short time and was adjudged winner of ‘The Best Young Rider Trophy’.
Gen Bipin Rawat, Chief of Army Staff gave away the coveted Trophy to Cadet Omkar Dalvi in the presence of a large number of spectators at the Army Equestrian, Delhi.
Emotionally elated parents thanked RIMC for the initial grooming their son.
Col Vivek Sharma, Commandant RIMC, expressed his happiness and exhorted all other cadets to make use of the enormous opportunities and ultramodern infrastructure existing on campus to hone their skill in sports and other co curricular activities. ‘’RIMC prides itself in shaping the careers of exceptional alumni like Asian Games Silver Medalist Maj Ashish Malik and Omkar Dalvi. They are a source of inspiration to young cadets said the proud Commandant Col Vivek Sharma.