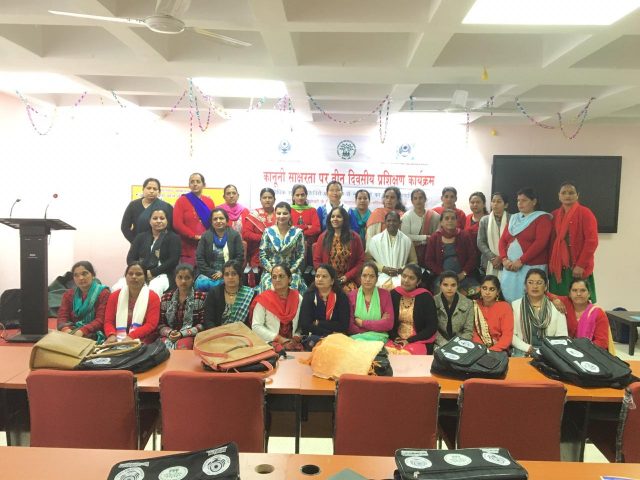 Dehradun, 3 Nov: Rural Litigation and Entitlement Kendra (RLEK) concluded a three-day Legal Awareness Training Programme in HP for 60 women with the support of National Legal Service Authority and State Legal Service at Zila Parishad Hall, Solan District, Himachal Pradesh.
Social Worker Josphin Singh sensitised women on Gender Equality and Gender based Violence Reproductive Rights of women and Sexual Harassment of Women at Workplace (Prevention, Prohibition and Redressal) Act, 2013 – Vishakha Guidelines.
Also a Women Forum was formed in which more than 20 active women voluntarily gave their names so that they could act as a pressure group and help other women in Solan find remedies to the violence against them as well as help them to enjoy their rights and avail the benefits of central and state specific government schemes which were described by Dr Jitendra Tiwari.
Legal trainer Chaitanya spoke on how to file an FIR, what are the rights of a person who gives information about the crime, and what they need to be kept in mind while lodging the report. The participants were further told about the dowry prohibition act, what dowry is, what steps were to be taken in case of dowry demand, etc. After that participants were told about the maternity benefits to be provided to employees during delivery.
Finally, a question-answer session was conducted in which participants cleared their doubts related to many laws taught during the three day legal literacy camp.
Topics covered in these three days by Master Trainer Rekha Pundir and Avdhesh Sharma were Maternity Benefit Act, 1961, PCPNDT Act; Right to Education Act, 2005, etc.
“A congregation of more than 600 women will be created in Himachal Pradesh in which the current High Court Chief Justice, HP, and other former Chief Justices will be invited from whom they can freely ask their queries,” said, Avdhash Kaushal, Chairperson RLEK.