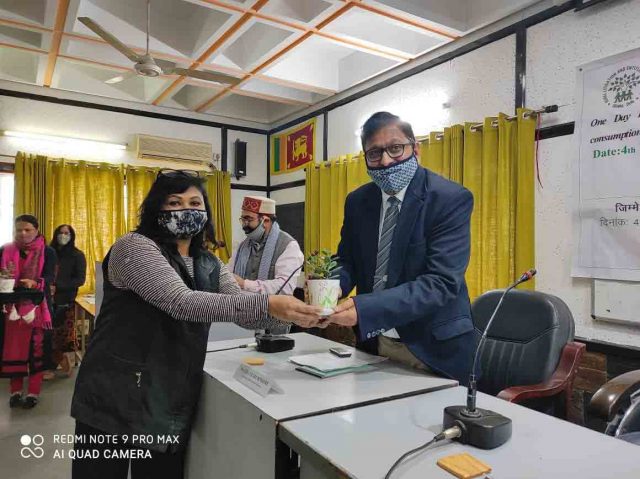 By Our Staff Reporter
Dehradun, 4 Dec: Rural Litigation Entitlement Kendra (RLEK) hosted a meet, today, on “Awareness generation for responsible consumption and production” in its Auditorium with the support of Consumer Unity & Trust Society (CUTS) International, a global consumer advocacy group that is headquartered at Jaipur.
The meet was a part of Green Action Week, which is a global campaign to promote sustainable consumption in the community space so that everyone has equal access to quality goods and services.
The meet was on the theme, ‘Sharing Community’, which aims to raise awareness on the reduction of unnecessary consumption of valuable goods and services, as well as the the burden on natural resources.
The session was inaugurated by Prof (Dr) Yugal Kishore, Dean of ICFAI University, Dehradun. Avdhash Kaushal, Chairperson, RLEK, welcomed the speakers and participants. He spoke of his experience with the Van Gujjars, who despite their illiteracy, promoted sustainable consumption of forest land by having their animals graze in the mountains for 6 months and in the plains during the winters. He mentioned how he personally uses biogas at his home, which is made from biodegradable waste such as vegetable and fruit peels. He mentioned how the public during the Covid pandemic had reduced waste generation in public gatherings. A more aware public alongside a stringent government and judiciary would be the best way of achieving responsible consumption and production.
SP Subudhi, Member Secretary of the Uttarakhand Pollution Control Board, quoted Mahatma Gandhi, saying, “Nature has everything for a person’s need but not enough for their greed.” He revealed that more than 1500 tonnes of waste is generated in Uttarakhand per day and this will go up to 2500 tonnes by 2030. Production of consumer goods generates solid, liquid and gaseous waste and the correct solution to limiting this waste is not to stop manufacturing but instead focus on the limitation of consumption by the masses.
Beejal Das, Assistant Municipal Commissioner, shared his experience on how the municipality deals with waste and how more can be done. He emphasised the need to segregate organic and inorganic waste starting from the home, and how the organic waste could be composted into manure.
Light was shed on the legal understanding of environmental laws and pollution control norms for efficient waste management by Professor (Dr) Yugal Kishore. He shared the lack of awareness of law in society and mentioned Articles 48 and 51G of the Indian Constitution, which are essentially the fundamental duties towards the environment that every citizen must follow. He defined his own 6R’s of recycling, which are Reduce, Redesign, Replace, Reuse, Recover, Recycle and only after exhausting these should one throw it away as waste. He also applauded the role of women in managing household waste.
The event concluded with a talk session. Attendees gave their own suggestions and remarks. The workshop was attended by 35 participants, which included municipal councillors, municipal ward members, ASHAs, Anganwadi workers and students.