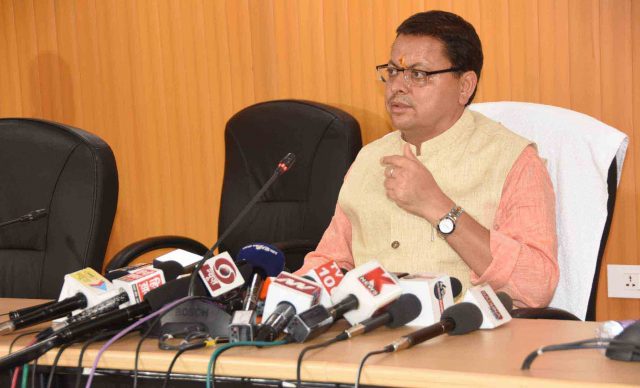 Dehradun, 6 Aug: Chief Minister Pushkar Singh Dhami held his first press conference in Doon, today, after taking over a month ago.
During the press conference held at the Secretariat Media Centre, he appeared to be in a cheerful mood but still restricted his interaction with the media to just one topic, approval of new road projects in the state. Dhami disclosed that the Central Road Infrastructure Fund (CRIF) had approved new road projects worth Rs 615 crores for Uttarakhand. With this fund, 42 road projects would be completed in the state.
Dhami said that, since the year 2017 till now, an amount of Rs 1124 crores had been received from the Centre for the construction of various roads in the state. He said that, on behalf of Uttarakhand, he was grateful to Prime Minister Narendra Modi and Union Minister Nitin Gadkari for being generous to the state in its development push.
The CM said that, during the past seven years, since Narendra Modi took over as Prime Minister of India, unprecedented work related to road infrastructure had been undertaken in Uttarakhand. The Modi Government had given due priority to Uttarakhand. A network of roads was being laid under the Bharat Mala Project and the All Weather Roads project in the state. The Modi Government had contributed a lot towards development in the state, he asserted.
Dhami added that, from the time of formation of Uttarakhand as a separate state till the year 2017, Uttarakhand had received a total amount of Rs 614 crores for roads under various schemes of the Centre. On the other, since 2017, the Centre had very generously contributed to development of the road network in Uttarakhand. During the past four and a half years since 2017, a large amount of Rs 1124 crores had been received from the Centre for construction of roads. This was apart from the fresh approval of Rs 615 crores for construction of 42 roads under the CRIF funds. He said that these 42 road projects approved under CRIF included construction of bypasses and bridges in the state, including some in Dehradun, such as in Ladpur, and a bypass to Kathgodam. Having a better road network was very important for the development of the state, he claimed. He cited the example of the Dehradun-Delhi Road by which people were reaching Delhi from Dehradun in about four hours. Dhami added that the network of roads in all the areas of the state had not only been developed properly but it was making the journey comfortable and easier for the people. A network of roads had been spread across the state during the past four and half years. Apart from this, the state had received approvals worth Rs 32,000 crores under various heads from the Centre, he asserted.
Dhami claimed that, with the improvement in the road network, the traffic congestion would ease and a better road network would have a positive impact on economic and social progress of the state since roads were the lifeline of the hills.

DEHRADUN, 6 Aug: Chief Minister Pushkar Singh Dhami has announced a reward of Rs 25 lakhs to Indian women’s hockey team player Vandana Kataria. The Chief Minister said that it was a matter of pride for the state was proud that Uttarakhand’s daughter Vandana Kataria had contributed immensely towards a stellar performance of the Indian women’s hockey team in the Tokyo Olympic Games. Dhami also stated that a new and attractive sports policy would be implemented in Uttarakhand soon. In this policy, there would be a provision of proper economic incentives especially for budding international level talent among the youth of Uttarakhand. It would be the endeavour of the state government to help grooming of talent like that of Vandana in every corner of the state.