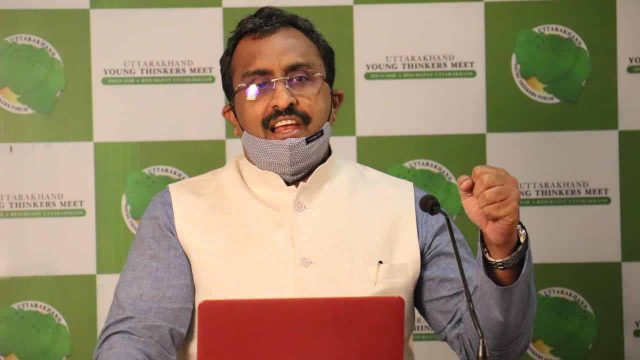 DEHRADUNn, 26 Jul: BJP National General Secretary & Member, Board of Governors, India Foundation, Ram Madhav inaugurated the “First Uttarakhand Young Thinkers’ Meet” in Doon, today. The meet was organised by Uttarakhand Young Thinkers’ Forum and Pt Deen Dayal Upadhyay Action & Research Society.
Madhav asserted that the youth of the country weren’t just its future but, also, its present. “Only if we start working now, will we be able to become a self-reliant nation by 2030,” he declared. He stressed on the need to be Aatmanirbhar and cited examples of countries like Israel, which were able to transform themselves through sheer determination.
He added there wasn’t any doubt that Uttarakhandis had the strength and intellect to achieve great things. He mentioned names like Yogi Adityanath, NSA Ajit Doval, CDS Bipin Rawat as examples of Uttarakhandis who are leading states and institutions in the country.
Shaurya Doval, Member, Board of Governors, India Foundation, was also present. He mentioned the need for radical changes required to resuscitate Uttarakhand’s economy. He suggested that the youth of Uttarakhand reduce their dependence on Government jobs and work towards becoming self-reliant.
Mangesh Ghildiyal, IAS; Lt Commander Payal Gupta, Indian Navy; Deepak Ramola, kindness ambassador, the UN; Prof Annapurna Nautiyal, VC, HNB Garhwal University; Jai Raj, PCCF, UK; Shweta Rawat, Founder and Chairperson of the Hans Foundation; Mukund Prasad, Director, the leisure hotels; Bhupendra Kainthola, Director, FTII, Pune; Manjeet Negi, Deputy Editor, AajTak; and Manisha Pandey, Founder and MD, Village Ways, were other eminent speakers at the 2 day meet, which had several sessions.
“I Woot Media” screened a short film on the theme ‘A Resurgent Uttarakhand’.
Addressing the valedictory session of the Uttarakhand Young Thinkers’ Meet, Chief Minister Trivendra Singh Rawat said that the youth of Uttarakhand have the power to steer the direction of the state. He emphasised the need for the youth of Uttarakhand to recognise their strength and potential.
The CM appreciated the efforts of Neha Joshi, the Convenor of Uttarakhand Young Thinkers’ Forum and her team of Akhilesh Rawat, Kritarth Uniyal, Aakansha Joshi, Ramesh Joshi, Abhinav Rawat, Pawan Pandey, Akhilesh Pratap Singh, Hemant Bhatt, Aakansha Joshi, Archit Dawar, Ashish Jain and Ashutosh Tripathi for bringing together such bright and talented minds on one platform.