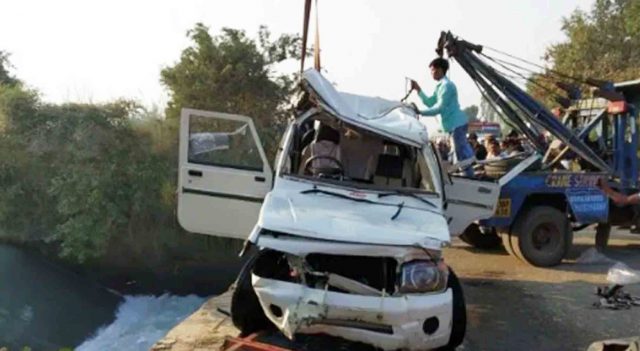 Dehradun, 11 Oct: Roorkee Tehsildar Sunaina Rana’s government vehicle went out of control and plunged into a canal. Three people, including the Tehsildar, were killed in the accident. Chief Minister Trivendra Singh Rawat has expressed deep sorrow over the accident.
The government car of the Tehsildar plunged into the Saravanpur Canal in Najibabad. After an intensive search, the three dead bodies were recovered. Three people including the Tehsildar died in the accident. The bodies and vehicle have been recovered from the canal.
The car broke through the railing of a bridge when the Tehsildar was returning from Nainital to Roorkee, four kilometers before Najibabad, and fell into the canal. The accident occurred late Saturday night. The incident sent shock waves through the administration.
DM Ramakant Pandey, SP Dr Dharamvir Singh, SDM Brijesh Kumar Singh and CO Praveen Kumar Singh reached the spot after receiving information about the accident.
Police reached the spot and began investigations. The Tehsildar’s family members have asked for a postmortem to find out the cause of the death. Chief Minister Trivendra Singh Rawat expressed deep condolences on the sudden demise of Tehsildar Sunaina Rana of Roorkee, driver Sundar, and orderly Ompal.