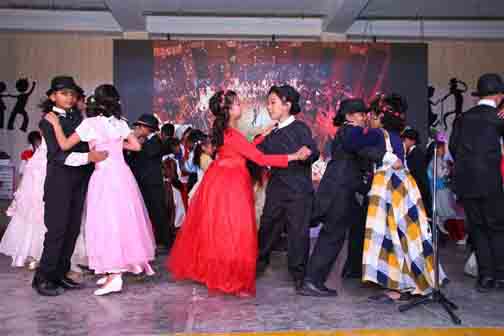 The Chief Guest was Pradeep Singh (former General Manager HR & Head, Corporate Sports Division, ONGC). In his address, Singh emphasised that educational institutions and teachers did a selfless job. He remarked that children should feel proud to be associated with such an institution. His message to the students was, “Teacher is the best resource, make the most of it.”

The evening celebration began with lighting of the Ceremonial Lamp followed by a melodious performance by the school choir and the much awaited Prize Distribution Ceremony, during which the meritorious little ones in academic and extra-curricular activities were felicitated.

Later, the children warmed up the evening with their captivating dramatisation of the poem, “Peanut Butter Sandwich”, and a colourful fusion dance. The evening reached its climax with the grandeur of the English Play “The Pied Piper of Hamelin”.

The function culminated with the school song and the promises of another triumphant year ahead.

Garhwal Post has established itself as a credible, balanced and forward looking newspaper in India. Based in Uttarakhand, the daily is read by the aware, socially and culturally responsible, high-income elite of society.
Contact us: info@garhwalpost.in
top five dating apps polish dating website uk dating agencies perth western australia