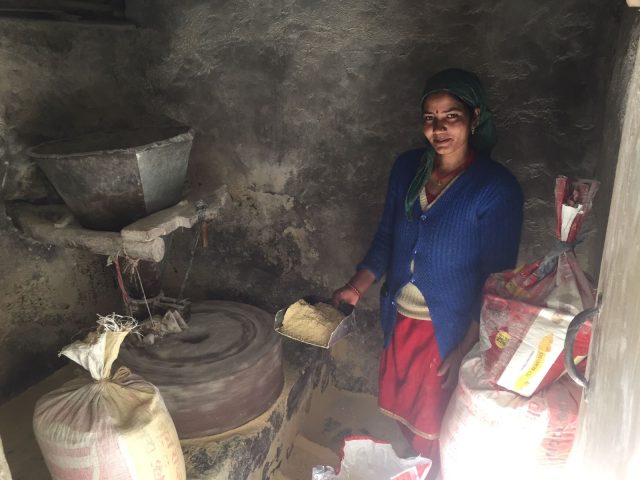 Dehradun, 10 May: ‘Saahas Dobasu’ is a project that seeks to leverage a traditional technique available in Uttarakhand that harnesses nature for producing energy. Gharat is a water turbine used for making flour that was widely present in the hills, especially in the Himalayan region. The water sources for running the gharats are glaciers, perennial streams and rivulets. Gharat is an indigenous technology that converts the potential and kinetic energy of water into mechanical energy.
The uses of gharats in Uttarakhand are varied. While crushing/pounding grains into flour is the most common use, they also come handy in shaping timber, textiles and metals. The utility and scale of gharats depend upon the force with which water can either naturally pass through it or is diverted towards it.
In Uttarakhand, Gharats are a traditional representation of typical mountain-life inter-dependencies, community bonds of diverse cultures and their coexistence. It used to be an integral part of an ecosystem which was of enormous value to community life in the hills where accessibility and logistics still are an everyday challenge to making a living. A functional Gharat is capable of producing and supplying electricity to approximately ten village households.
Gharats in the hills are now on the decline, even as some of them are being upgraded to run on electrical motor equipment. Traditionally, a Gharat is meant to run on the natural force of water, thereby pre-empting the generation of heat, especially during the grinding process. This had the advantage of retaining the nutritional value of the grain.
Contemporary economic pressures are one of the major reasons for gharats either becoming extinct or being ‘upgraded’ through electrification.
‘Saahas Dobasu’ is an initiative of the Saahas Foundation Inclusive Resource Centre, a community-led social enterprise which works towards restoration and revival of gharats as well as promoting use of consumables resulting from it. This is taking a step forward towards a healthy lifestyle and the creation of a source of livelihood in the hills.
The project design is such that it engages communities on the forefront, establishes stakes and shares, wherein local perspectives, insights, heritage and culture is promoted with a deep sense of leadership, economic viability and financial autonomy.
The ‘Saahas Foundation’, by engaging Sunil Nautiyal with community members (Upender Singh, Surender Singh and Jagat Singh), has successfully been able to revive three gharats in Dobasu – Bunglow ki Kandi village, in Tehri Garhwal district. The successful revival of gharats and thereby creating income through it has sparked both interests and enquiries for revival of more gharats in, both, Tehri and Pauri districts.
‘Saahas Foundation’ is determined to take the initiative forward which benefits communities in the hills across various human dimensions and also contributes to restore and preserve the cultural heritage of Uttarakhand.

Garhwal Post has established itself as a credible, balanced and forward looking newspaper in India. Based in Uttarakhand, the daily is read by the aware, socially and culturally responsible, high-income elite of society.
Contact us: info@garhwalpost.in
escape room date meetup charleston