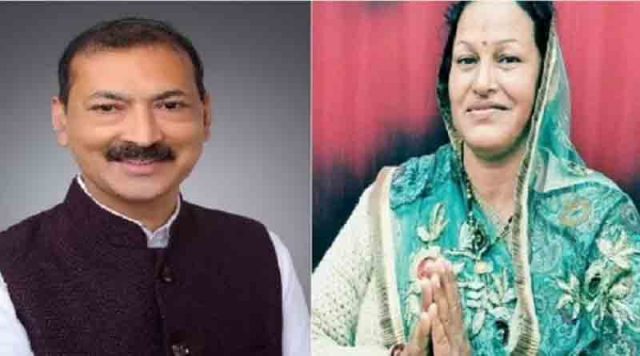 By Arun Pratap Singh
Dehradun 30 Mar: After the notification of the bypoll for the Salt Assembly constituency (in district Almora), both the major parties have declared their candidates and there have been no surprises. While the BJP has expectedly chosen to field Mahesh Jeena, brother of late Surendra Singh Jeena, who was the incumbent MLA from here, to gain sympathy votes, the Congress too has decided to field Ganga Pancholi, the last time candidate who had lost the assembly election in 2017 against Surendra Singh Jeena by a margin of 2,904 votes, having secured a total number of 18,677 votes against the 21, 581 secured by the winner. It may be recalled that the incumbent MLA Surendra Singh Jeena had won the assembly constituency several times and it was his death due to Covid-19 infection in November last year that led to the bypolls. Since his wife, too, had died due to Corona infection in October before him, the BJP decided to field his brother Mahesh Jeena.
Today was the last day of filing nominations. Both Jeena and Pancholi filed their nominations today. It may be recalled that Pancholi had given a tough fight to Jeena in 2017, even when there was a strong pro-Modi wave prevailing in Uttarakhand and UP at the time of the assembly elections. It may be recalled that ex-MLA Ranjeet Rawat, who has held this constituency in the past when its boundaries were different, was also lobbying for his son Vikram Rawat. Sources in the Congress claim that Ranjit Rawat’s one time political mentor Harish Rawat was behind denial of the party ticket to Vikram.
Technically speaking, less than a year is left for the assembly elections in the state and, hence, there is little time left for whoever wins the bypoll. For this reason, it may appear that there are no major takeaways for either the BJP, which already has a brute majority in the state, or the Congress which has nothing to lose as this seat was held by the BJP. However, given the fact that there was some anti-incumbency prevailing in the state against the earlier CM, Trivendra Singh Rawat, causing the BJP’s central leadership to change its leader in the state with Tirath Singh Rawat replacing Trivendra Singh Rawat, the stakes are high for the present CM and the new BJP State President Madan Kaushik at the personal level.
Sensing this, Congress today held a press conference claiming that its top leaders would hold rallies in Salt which would include Sonia Gandhi, Rahul Gandhi, former PM Manmohan Singh and National General Secretary KC Venugopal, besides local leaders including State President Pritam Singh, in-charge Devendra Yadav, Leader of the Opposition Indira Hridayesh, former CM Harish Rawat, former state president Kishore Upadhyay, Govind Singh Kunjwal, Mahendra Singh Mahra, MP Pradeep Tamta, Mahendra Singh Pal, Deputy Leader of Congress Legislative Party Karan Mahra, Qazi Nizamuddin, Surendra Singh Negi, Ranjit Singh Rawat, Rajendra Bhandari, Madan Singh Bisht, Prakash Joshi, Adesh Chauhan, Manish Khanduri, Harish Dhami, Sarita Arya, Manoj Tiwari, Manoj Rawat, President of SC Department Rajkumar and Youth Congress President Sumithar Bhullar.