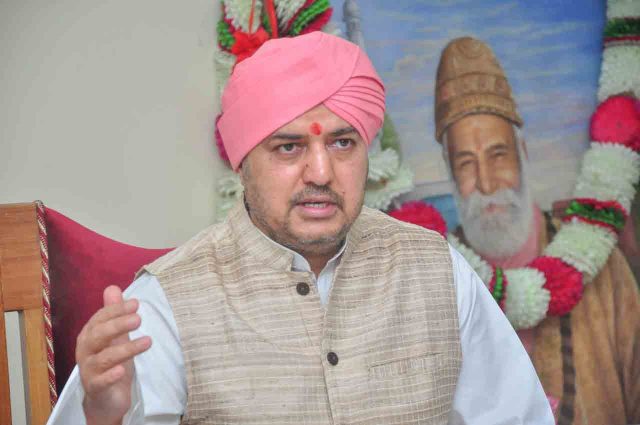 By Our Staff Reporter
Dehradun, 30 Mar: Devotees have started reaching the Darbar Shri Guru Ram Rai Maharaj premises, here, for the Jhanda Mela. On Tuesday, sangats reached from Punjab and other nearby states. The organising committee of the Mela has appealed to all the ‘sangats’ that they must have RT-PCR negative reports not earlier than 72 hours to obtain entry in the Darbar Sahib. Those devotees who had come without RT-PCR reports were sent to Shri Mahant Indiresh Hospital to get these done. 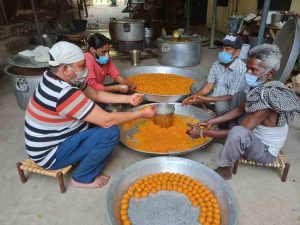 The prime attraction of the Mela is the hoisting of the Jhandeji (Holy Flag Pole). This will be held on 2 April. The members of the organising committee are giving a finishing touch to the preparations of the mela with the help of the district administration.
The committee has installed flexes to inform the devotees about the various precautions to be observed on 2 April. Volunteers are also taking on the task of hand sanitisation of the devotees.
The stitching of ‘Gilaafs’ (covers) was initiated at the Darbar Sahib on Tuesday evening. Three types of gilaafs are put over the flag pole. As many as 41 ordinary covers are placed on the pole. These are followed by 21 gilaafs of ‘chenille’. The one on top of all these is known as the ‘Darshani Gilaaf’.
Mahant Devendra Dass released a message for the ‘sangat’ about the various precautions to be observed to prevent spread of Corona Virus. He asked all to adhere strictly to the advisory released by the District Administration and Department of Health.
Three big langars have been started by the Mela committee for the ‘sangat’. These are at the Darbar Sahib premises, Shri Guru Ram Rai Public School, Talab, and Matawala Bagh.
Keeping in mind the abrupt increase in the cases of Covid-19, the managing committee of the Darbar Sahib and Shri Jhanda Mela organising committee met Mahant Devendra Dass and, after a comprehensive discussion, it was decided that the route of the ‘Nagar Parikramma’ would be curtailed this year. It will start at 7:30 a.m. on 4 April from the Darbar Sahib premises and reach Bhandari Chowk-Akhara Bazar-Darshani Gate-Saharanpur Road-Samadhi Sthal Mahant Sahiban and return to the Darbar Sahib.