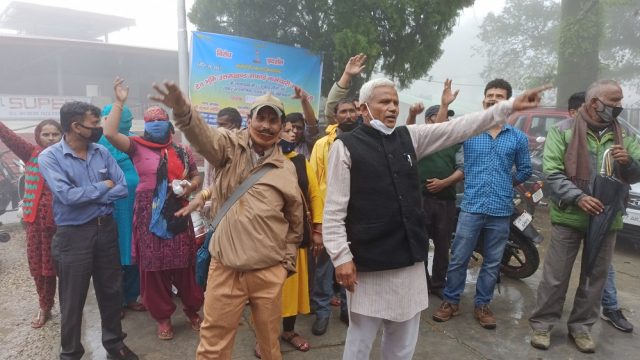 Mussoorie, 22 Jul: The ‘Devbhoomi Safai Karamchari Sangh’ raised slogans against the state government and protested fiercely at a symbolic dharna held in the Mussoorie municipal premises in support of their 11-point charter of demands.

Krishna Godiyal, President of the Sangh, said that work boycotts and demonstration were being held in the entire state at the call of the state leadership.

Their primary demand is that the contract system for sanitation workers be abolished. Owing to the government’s refusal to consider the demand, sanitation workers in all the district headquarters, municipalities, nigams and panchayats at the state level boycotted work today.

He said the agitation would continue till their demands are met. Krishna Godiyal recalled that, after an assurance given by the Chief Secretary in the past, the protest was postponed for 2 months, but nothing was done.

Abolition of the contract system, giving ownership rights to sanitation workers over their staff quarters, simplification in making certificates, abolition of the pension system by the government in 2005, were among their demands. He declared the BJP would face the repercussions in the 2022 elections. Present on the occasion were Billu Balmiki, Arun, Naresh Kumar, Gulshan, Rohit, Baldari, Deepmala, Minakshi, Lalita, Sujit Sahdev, and many others.