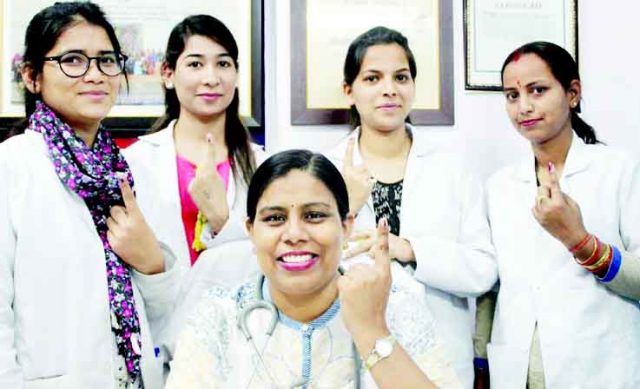 By OUR STAFF REPORTER
Dehradun, 9 Apr: Sanjay Maternity Centre, Jakhan, has offered free consultation to female voters on 11 and 12 April. People participating in voting will be eligible to get this offer by showing ink on their fingers.
Dr Sujata Sanjay of Sanjay Orthopaedic, Spine & Maternity Centre told reporters that the purpose was to encourage voting among the general public. Voting for a government enabled everyone to participate as equal citizens. Women played a vital and decisive role in the elections in the hill districts of the state, as their voting percentage was higher than that of men. Elections over the last decade have brought more women to the polling booths in India.
Women voters would be just as interested in wider socio-economic issues as male voters, and working with the idea of women as a separate vote bank could only go so far in unpacking the dynamics of how and why women vote in India.
She threw light on the role of women in building a prosperous society. Literacy among women folk was the main pillar. Dr Sujata said this gender was most vulnerable to abuse and exploitation, as their voices were not heard in the male dominated society. Gender was now emerging as a fundamental axis of Indian democracy, alongside caste, class, region, religion and ethnicity.
“The more women vote and participate in democracy, the more chance for establishment of equality and women empowerment. Democracy is the way to go if equality is to be a reality,” she added.