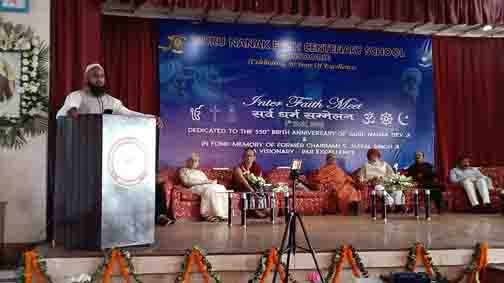 By Sunil Sonker
Mussoorie, 7 May: On the occasion of the 550th birth anniversary of Guru Nanak, a Sarva Dharma Sammelan was organised by Guru Nanak Fifth Centenary School at its auditorium. Gurudwara Shri Hemkund Saheb Management Trust Vice President and Uttarakhand Minority Commission Chairman Narendra Jeet Singh Bindra inaugurated the programme by lighting the ceremonial lamp.
On this occasion, priests of all religions provided detailed information about their beliefs and all extended the message of brotherhood. They advised against rigidity of religion. Dean ND Sahani, while highlighting the life and character of the late Sardar Jaspal Singh, said that he was a great educationist who opened the school on the 500th birth anniversary of Guru Nanak Dev. His dream would be fulfilled when each person connected to the school would follow the path shown by him.
Chief Guest Narendra Jeet Singh Bindra appreciated the Sarv Dharma Sammelans organised by Guru Nanak School and said that in the present scenario, such conferences were required so that the message of brotherhood could be communicated among all. He said that religion was just peace and love and not a reason to fight among each other.
Speaking about the Hemkund Sahib Yatra, he said more than 40 soldiers were stationed at the Gurudwara working to remove the snow on the path. He expressed confidence that by 20 May, the road to Hemkund Sahib would be cleared and the pilgrims would easily complete their pilgrimage. On 1 June, the doors of the Hemkund Sahib would be opened for which the entire preparation had been completed by the committee and the government. He said that all Dharmshalas and living places have been upgraded in Hemkund Sahib, so that pilgrims wouldn’t face any problem. The use of plastic in Hemkund Sahib had been fully banned.  Prasad would be given in starch made packets, which had already been initiated at the temple of Mata Vaishno Devi. Many people including Principal Anil Tiwari and Sunil Bakshi were present on the occasion.