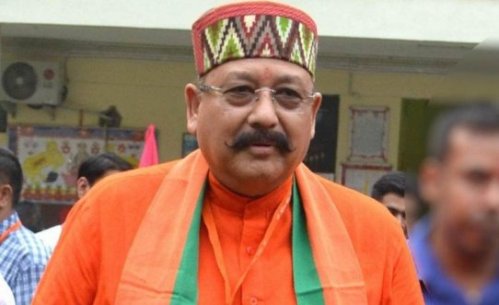 DEHRADUN, 13 Mar: Cabinet Minister and senior BJP leader Satpal Maharaj has dismissed the speculation of joining Congress. Addressing a press conference today in New Delhi, Maharaj said that there was no question of him joining Congress party. It may be recalled that rumour was rife for past two days of Maharaj switching over to Congress and contesting LokSabha poll from Pauri constituency on Congress ticket. The social media had gone viral with this speculation, particularly after the Leader of the Opposition, Indira Hridayesh had stated that a ‘big’ BJP leader would join Congress in presence of Congress President Rahul Gandhi in Dehradun on 16 March. Also, some sources in the BJP were also claiming that Maharaj was annoyed with Chief Minister Trivendra Singh Rawat and was mulling returning to Congress.
Yesterday, Satpal Maharaj was in Delhi and this gave further strength to the speculation. Maharaj had yesterday called on Union Finance Minister Arun Jaitley and BJP President Amit Shah. However, late last evening, Maharaj sought to dismiss this speculation as baseless but today he had to address a press conference in New Delhi to make it clear that he was in the BJP and would remain in the BJP. He also denied that he was annoyed with the CM or the party. He added that he was happy in the BJP and would be touring the country to campaign for the party’s win. He reminded the media that he had been named as a star campaigner for the party at the national level.
Interestingly, he also claimed that he was not lobbying for the party ticket to contest on Pauri seat. He further claimed that he had not staked any claim for the party ticket for himself or any of his family members. Political analysts however feel that it is not easy to believe that he is not staking any claim for the party ticket on Pauri seat since he is an ex-MP from Pauri and one of the senior most leaders from the constituency after the present MP BC Khanduri.
However, the speculation about Maharaj had hardly subsided when another speculation has gone viral in the state. It is being claimed that son of the present MP BC Khanduri, Manish Khanduri will be joining Congress on 16 March in Dehradun in the presence of Congress President Rahul Gandhi and will be contesting the parliamentary polls on Congress ticket from Pauri. This speculation led many party seniors at the national level to rush to BC Khanduri to manage the situation. Speaking to this correspondent, BJP State President Ajay Bhatt claimed that no BJP leader was switching over to Congress though several Congress leaders were contacting him and had expressed their desire to join the BJP. He added that Manish Khanduri was not in active politics and was presently not a  member of BJP. This response seems evasive though several political analysts feel that Manish Khanduri had nothing to gain by joining Congress unless he is given the party ticket to contest poll on Pauri seat. In that situation, Congress could see a major rebellion in the Pauri district because there were many serious contenders for the party ticket in Pauri, particularly in case the BJP does not put up BC Khanduri as its candidate again and they can hope for easier fight in that situation!