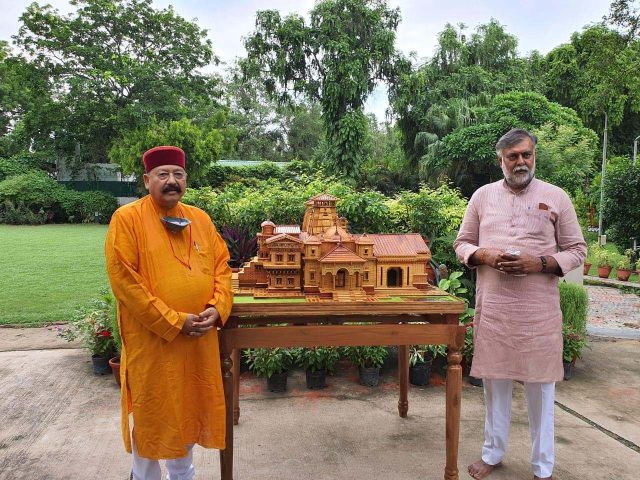 Maharaj also presented a model of the Char Dham to the Union Minister and thanked him for his continued support and guidance in re-starting the Char Dham Yatra in the state.
Expressing his gratitude, Satpal Maharaj said, “With the support of the centre, the Char Dham have been re-opened in Uttarakhand and pilgrims from the Green Zone of the state are going there.”
At the meeting with the Union Minister, Satpal Maharaj also requested sanction of funds for the ‘Swadesh Darshan’ and ‘Prasad’ schemes. He informed the Union Minister that 98 percent construction work on the Eco and Adventure Destination in Tehri had already been completed under the Swadesh Darshan Scheme. The remaining work on construction of parking would be completed by September 2020. Similarly, the work on the Kumaon Heritage Circuit had been completed.
Satpal Maharaj also revealed that the development of infrastructure facilities on the Kedarnath Road under the ‘Prasad Yojana’ was ongoing at the expected pace and would be completed by October 2020.
Satpal Maharaj also requested Prahlad Patel to provide in principle approval for the ‘Mahabharata Circuit’ concept. He said, “Due to excessive rainfall and snowfall at Badrinath Dham, progress could not be made, earlier, but currently the construction work on the project is being done at a rapid pace. Efforts are being made to complete it within the stipulated time.”
Under the Prasad scheme, in-principle consent has been provided for the development of tourism facilities in Gangotri and Yamunotri.
Satpal Maharaj also sought early approval of the Government of India’s proposal for centralisation of the State Institute of Hotel Management (SIHM) in Uttarakhand and requested release of the remaining amount of Rs 1 crore out of the approved amount of Rs 4.75 crore for the Food Craft Institute (FCI) based in Almora. So far, Rs 3.75 crore central assistance has been released under this head.
Maharaj added, “While the Government of Uttarakhand remains committed to completing the development work in the state, it is also ensuring that the guidelines of social distancing are maintained. The tourists have started coming to Uttarakhand and we want their journey to be smooth and easy. The construction work on the Char Dham four lane road is going on rapidly and I am looking forward to its completion by the end of this rainy season.”