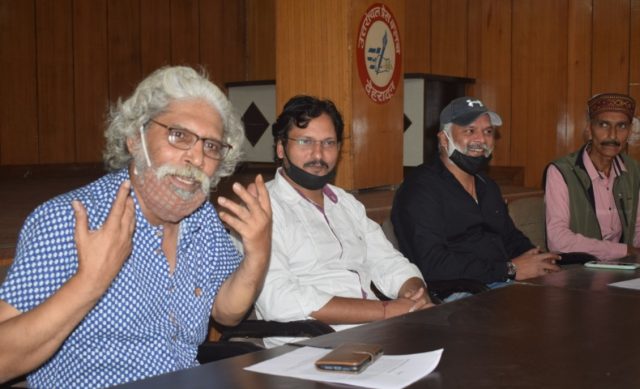 By Our Staff Reporter
Dehradun, 13 Oct: A first of its kind scholarship has been announced by ‘Pancham Veda Creations Charitable Trust’ across the country. Uttarakhand’s leading production house, Five Faces Entertainment’s Academy of Creative Training and Skills (ACTS) on Monday announced its six-month Acting and Basic Film Making Course, which is going to begin next month. Veteran filmmakers of the film industry including NSD, FTII will train the students.
Pancham Veda will provide scholarships for 10 seats out of a total of 20 seats in this course. The leading production houses of the state will also provide placements to the students who have successfully completed the course. In an interaction with reporters here, on Monday, ACTS and Pancham Veda Creations jointly made this announcement.
Also, 10 seats will be reserved for students of Uttarakhand origin. Dr Anil Upadhyay of ACTS said these scholarships will be given by the Trust. A scholarship of Rs 36,000 will be given to each student.
Renowned actor who has performed in many films, Doordarshan and other channels, Anurag Verma, the founder of Panchma Veda, said the scholarship had been launched to provide a platform to the state’s talent. Leading personalities from the film and TV industry, including the National School of Drama (NSD), Film and Television Institute of India (FTII), will impart the training.
If this course is successful, diploma and degree courses will also be started soon. On the occasion, Shrish Dobhal, the renowned NSD-trained actor and filmmaker, expressed happiness that a golden opportunity for the youth looking for a career in acting and film making was being provided in Dehradun.
Anurag Verma disclosed that an online test would be conducted at the national level for talented students to get scholarships/admission. Detailed information in this regard will soon be given through social media and via Facebook pages of Five Faces Entertainment and Pancham Veda. Along with ACTS, five major production houses of the country have also come on a platform to provide opportunities to these aspirants.
Five Faces Entertainment Pvt Ltd and Qureshi Production, the makers of realty shows on MTV, JSR Production House, producers of 72 Hours Film, KSM Production, Padmasiddhi Productions and Cinevox Productions have agreed to provide professional training to students of ACT.
Prashil Rawat from JSR Production and Avinash Dhyani from Padmasiddhi Production said that they would make about 10 films in the coming years. Students trained in this field will be given work according to talent. JSR Production’s two films, ‘Soumya Ganesh’ and ‘Amangal’, are almost complete and shooting of ‘Lifeline’ is currently going on in Harsil, which is being directed by Avinash Dhyani. Wasim Raja of Qureshi Production and Ravi Priyanshu of Five Faces Entertainment said that their realty show would give a chance to students of ACTS in Season-2 and an upcoming web series.
Kunal Shamsher Malla, Director and renowned actor of KSM Production, said that, in his upcoming projects, students of ACTS would also be given opportunities. Kunal Malla has produced the Bollywood film, ‘1978 A Teen Night Out’, and these days is busy directing “The Teachers’ Day”. Mahadev Raturi of Cinevox also promised opportunity to students of ACTS. Sudarshan Juyal, who specialised in direction from FTII, Pune, said that there is need for government institutions in all states to increase the participation of youth of Hindi speaking areas in Hindi cinema. Such an institute in the state would benefit local artists. Film actors Radha Bhardwaj, Devmohan Tiwari, Nitish Nandkishore and young director Manvi Nautiyal were present on the occasion.