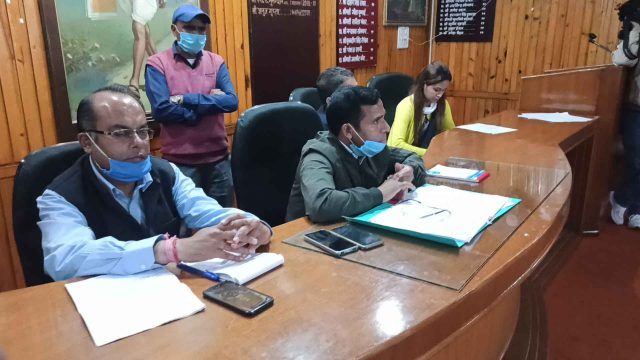 By Our Staff Reporter
Mussoorie, 30 Jul: A meeting was held at the Mussoorie Municipality under the leadership of SDM Premlal with the Mussoorie Parents’ Association regarding fees and government instructions during the lockdown for private schools here. The managers and principals of the private schools participated.
The parents complained to the SDM about harassment by private schools asking them to deposit the fees. They opposed the schools’ demand for payment of fees for the lockdown period. The parents also demanded adjustment of fees taken by the schools in the month February and March against the demanded tuition fees.
The school representatives said they were conducting online classes in adverse conditions. They were also having difficulty in running the schools, but no pressure was being applied on the parents to pay tuition fees. The schools were facing lots of problems in paying salaries of teachers and in maintenance. Jagjit Kukreja demanded the schools submit the format of their fixed tuition fees to the SDM’s office, so that the parents would be clear on what needed to be paid.
SDM Premlal disclosed that all schools had been instructed by the central and state governments to charge only tuition fees. The schools also could not force parents to deposit the fees immediately. He said any school found in violation of the instructions could have its recognition canceled. He appealed to the parents to make a written complaint to the administration if this is done.
Also present on this occasion were Rajat Aggarwal, Jagjit Kukreja, Devendra Gunsola, Garima Malik, Education Department representative Nasir Hussain and others.