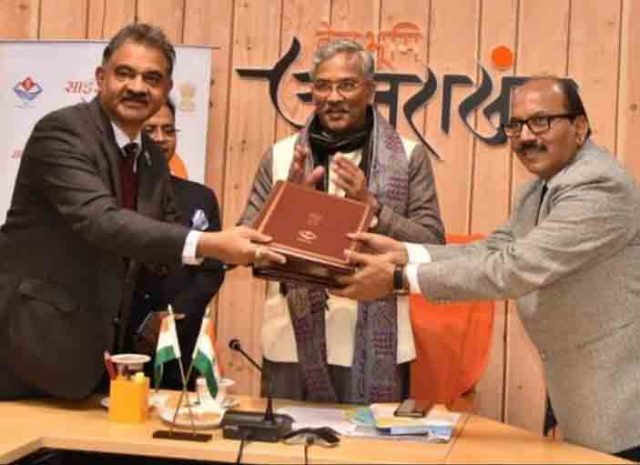 By Our Staff Reporter
Dehradun, 6 Feb: A Memorandum of Understanding was signed between Uttarakhand State Council for Science and Technology (UCOST), a state government body and National Council of Science Museums (NCSM) at the Chief Minister’s residence on Friday towards setting up of a science city in Doon. The MoU was signed in the presence of Chief Minister, Trivendra Singh Rawat. It was signed by Dr Rajendra Dobhal, Director General, UCOST and Secretary NCSM, Samarendra Kumar.
It may be noted that the initial cost of setting up of this proposed Science City was estimated to be Rs 173 crores of which, an amount of Rs 88 crores was expected to be incurred by the Centre and an amount of Rs 85 crores by the Uttarakhand Government. It was stated on the occasion that it would take four years to complete this project.
It may be recalled that NCSM is an autonomous body of the Ministry of Culture, Government of India, which constructs and operates science museums in the country. Science City would be developed at Vigyan Dham, Jhajhra in Dehradun.
Speaking on this occasion, Chief Minister Trivendra Singh Rawat said that special efforts were needed to make this Science City as a major centre of attraction for all. Efforts ought to be made to complete it before the stipulated time. He said that it was necessary to have strong will power to complete any major project. Efforts would be made to complete this project ahead of time with everyone’s collective efforts. He said that this would be an important step towards furthering the scientific culture of India. The state government would make every effort to ensure that people could see the specialty of Uttarakhand through Science City. The location for Science City had also been chosen keeping in mind the convenience of students.
Major themes at the Science City would be related to Astronomy, Robotics, Legacy of Science and Technology, Geological Life, Climate Change, Energy, Biotechnology, Virtual Reality, Augmented Reality, Space Theatre Support, Planetarium with Artificial Intelligence, Digital Panorama on Biodiversity of Himalayas, Simulators , Aquariums, High Voltage and Laser Display, Outdoor Science Park, Theme Park, Biodome, Butterfly Park, Fossil Park and Miniature Uttarakhand. Besides this a Convention Centre and Exhibition Hall would also be part of the Science City.
Science City will be an important centre of attraction for students, teachers, citizens and tourists.