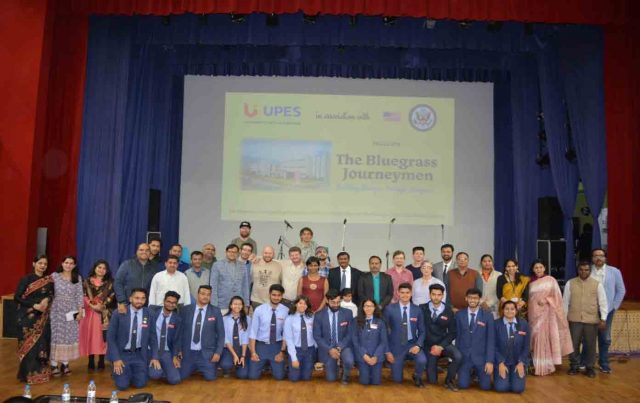 Dehradun, 5 Mar: The University of Petroleum and Energy Studies (UPES) hosted the American band, ‘The Bluegrass Journeymen’ (TBJ), for a performance at its Bidholi campus on 3 March.
The band was welcomed with the traditional teeka ceremony. The UPES students opened for the visitors’ gig with an instrumental fusion performance involving a Tabla, Guitar, Flute and Keyboard.
The eight-piece band hit the chords for tracks like ‘Helen’, ‘Love of the Mountains’ and ‘Squirrel Hunters’. What was interesting was they also sang Bengali Bluegrass songs. The audience was in for a surprise when the band’s lead Patrick Fitzsimons belted out a Bluegrass version of Shah Rukh Khan’s iconic romantic song, ‘Tujhe Dekha To Ye Jaana Sanam’ from his magnum hit ‘Dilwale Dulhania Le Jayenge’ (1995), in the jam-packed auditorium. The event concluded with a vote of thanks by Dr Ajay Prasad, Head, Computer Applications, School of Computer Science, UPES. The Band received a standing ovation for its lively performance from the over 500 member audience.
The Bluegrass Journeymen is a collective of musicians from and around Denver, Colorado, with the aim to present traditional American Bluegrass Music to the world. The visit to UPES was a part of the US Embassy’s initiative of ‘Building Bridges through Bluegrass’.
The band line-up included the band’s founder Patrick Fitzsimons on ‘Mandolin & Vocals’; Billy Cardine on ‘Dobro Resonator Slide Guitar’; Shaun Nicklin on ‘Banjo & Vocals’; Andrew Conley on the ‘Cello’; Coleman Smith on‘Violin/Fiddle’; Summers Baker on ‘Guitar & Vocals’; Jean-Luc Davis on ‘Bass’ and the band’s manager, Elliot Siff. Kolkata-based musician Nabanita Sarkar accompanied the Band contributing on the ‘Ukulele &Vocals’. The Embassy delegation was led by its Public Diplomacy Officer, Catherine Fischer, and her colleague Robin Bansal, Cultural Affairs Specialist, both from the Embassy’s North India Office.