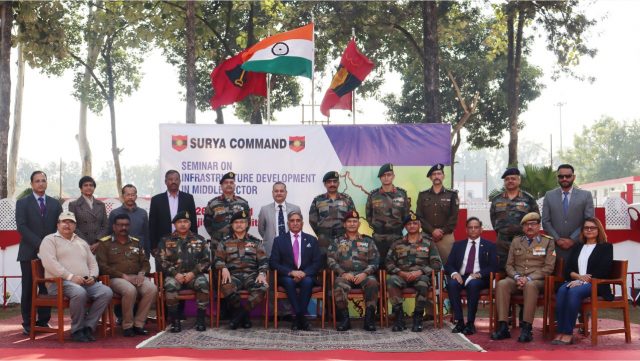 By Our Staff Reporter
Dehradun, 26 Nov: A two-day Seminar on ‘Infrastructure Development in Middle Sector’ was organised here by the Central Command of the Indian Army on 25 and 26 November. Senior Officers of the Army and Civil Administration, Geologists, Scientists, Engineers and Academicians from IIT Roorkee, FRI Dehradun, LBNSAA Mussoorie, Wadia Institute of Himalayan Geology and UPES brainstormed the roadmap for sustainable infrastructure development in the border states of Himachal Pradesh and Uttarakhand.
Lit General Yogendra Dimri, GOC-in-C, Central Command, delivered the keynote address and shared his views with the panelists and participants. Amongst the participants were Capt (Dr) Shekhar Dutt (Retd), former Governor, Chhattisgarh, and former Defence Secretary; Radha Raturi, Additional Chief Secretary, Uttarakhand; Dilip Jawalkar, Secretary, Tourism, Uttarakhand; Dr Rajat Chatterjee, Scientist, Indian Institute of Remote Sensing; and Professor Kamal Jain, HOD, Civil Engineering, IIT Roorkee, who examined a wide range of issues on Himalayan Geology, state of infrastructure development projects and the way ahead for holistic development in the two border states.
The convergence of thoughts at the Seminar would go a long way to enhancing civil-military cooperation in a ‘whole of government’ approach towards holistic and sustainable infrastructure development of the region. The Seminar has opened doors for more such discussions in the near future to enhance optimum utilisation of national resources through a shared awareness amongst various government agencies.