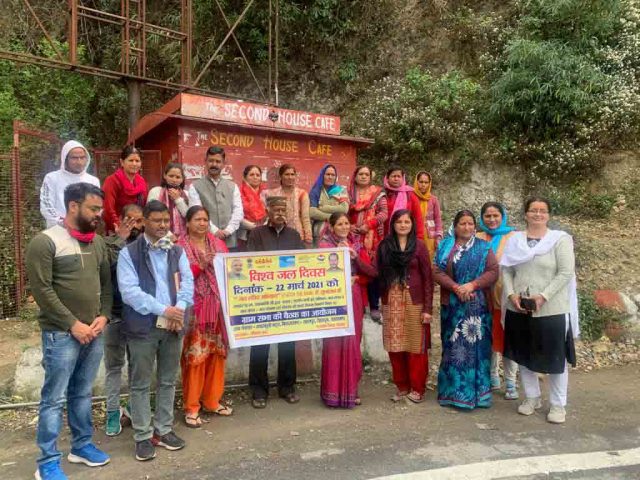 By Sunil Sonker
Mussoorie, 22 Mar: On the occasion of World Water Day, villagers were administered oaths on water conservation in Kyarkuli Bhatta village, here, today. TS Rawat, Assistant Engineer, Mussoorie Garhwal Jal Sansthan, attended the seminar held on the occasion in the village. Gram Pradhan Kaushalya Rawat welcomed the chief guest.
Giving detailed information about the nationwide programme, ‘Catch the Rain’, TS Rawat said it had been started simultaneously in 718 districts across the country on Monday. For water conservation, the slogan ‘Catch the Rain, When It Falls, Where It Falls’ means harvesting rainwater. He said that the objective of this campaign is to ensure that there is a rain water harvesting system on the roof of every house so that the maximum amount of rain water can be collected. He made people aware about water conservation in Mussoorie and urged them to periodically clean the nearby natural water resources to prevent drinking water problems. Water conservation promotion was not possible without public participation.
Pradhan Kaushalya Rawat and BJP leader Rakesh Rawat said that government had provided clean water through pipelines to all houses in Kyarkuli Bhatta village under Jal Jeevan Mission and Har Ghar Jal Yojana. Special care has been taken to ensure that there is no wastage of drinking water. The distribution of drinking water has been done in a planned manner. At the seminar, a pledge on conserving drinking water was administered to the villagers, including women.
Also present on this occasion were Deputy Chief Jitendra, Rukmani, Meena Kotal, Roshni, Sunita, Neha, Dayal Singh Rawat, Dheeraj Rawat, Ashish Thapli, Rajesh Rawat, Narendra, Dipanshu and Rajni.