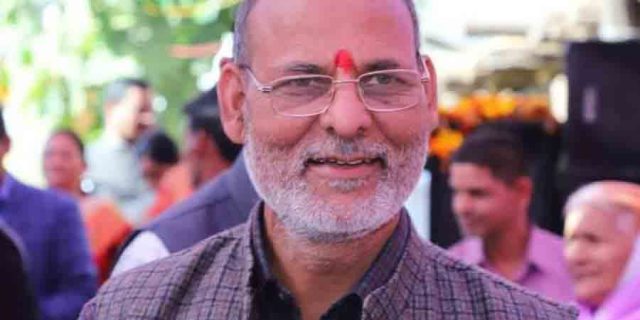 By Arun Pratap Singh
Dehradun, 13 Nov: Senior BJP leader and former cabinet minister Lakhiram Joshi was suspended from the party, today, by State President Bansidhar Bhagat. In addition, he was also sent a show cause notice to which he has been asked to respond within a seven day period.
It may be recalled that Joshi had written a letter to Prime Minister Narendra Modi asking for change of guard in Uttarakhand. He had described the performance of Chief Minister Trivendra Singh Rawat as unsatisfactory. Whether this letter was deliberately leaked to the media or somehow managed to make it to the social media is something that needs to be verified. However, the party has not taken to this letter in positive stride and has considered this letter as a breach of discipline. It may be recalled that Joshi has never, himself, addressed the media in this regard nor has shared this letter on any of his social accounts. Still, the state party unit did not choose to ignore this letter and, instead, decided to suspend the senior party leader.
Although Joshi has confirmed sending this letter, he has added that writing such a letter is not an act of indiscipline, claiming further that he did not leak the letter to the media. He added that this was not an act which should attract expulsion from the party as per the party constitution. The letter has been viral for the past two days on social media.
In this letter, Joshi has urged a change of leadership in Uttarakhand and also questioned the performance of the state government. Sources indicated that the party is in no mood to spare him as the state elections were drawing near and such a letter according to the state party leaders could “needlessly dent the image of the government and its leadership”. The possible action could be his expulsion from the party.
BJP State Vice President Dr Devendra Bhasin disclosed that Joshi had been asked to explain his action.
On the other hand, BJP State President Bansidhar Bhagat said that discipline was one of the most important things in the party. Therefore, no concession could be given to any worker, no matter how big that leader might be in case of any indiscipline on his or her part. He went on to claim that, if anyone had any complaints or issue in mind, they could have directly told him instead of indulging in “indiscipline”. He could have taken the issue forward at an appropriate level but the “indiscipline” would not be tolerated under any circumstances.
It may be recalled that once a very senior and important party leader, Joshi has been side-lined for long. He was a three time party MLA in undivided Uttar Pradesh. He had won the elections in 1991, 1993 and 1996. When Uttarakhand was formed as a separate state in November 2000, he was made a cabinet minister. However, he lost the 2002 elections and has since been side-lined. In between, he had quit the party too and had joined the party led by Uma Bharati. When Uma Bharati returned to BJP, he also re-joined the party. However, he was never again given a party ticket to contest assembly elections and has remained side-lined.

Garhwal Post has established itself as a credible, balanced and forward looking newspaper in India. Based in Uttarakhand, the daily is read by the aware, socially and culturally responsible, high-income elite of society.
Contact us: info@garhwalpost.in
seeking millionaires popular dating websites