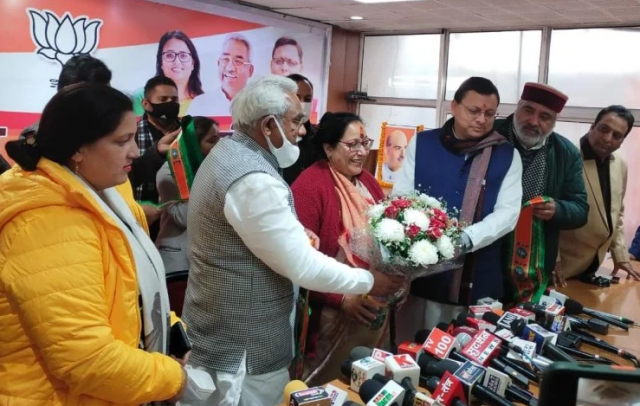 By Arun Pratap Singh
Dehradun, 17 Jan: After Cabinet Minister Harak Singh Rawat was expelled from BJP for a period of 6 years last night amid speculation that he may join the Congress, the Congress party too suffered a major setback when Sarita Arya, former MLA from Nainital and currently the State President of Mahila Congress, joined the BJP this morning.
She had been meeting several BJP leaders over the past few days and there was speculation that she had also called on Union Minister Pralhad Joshi, recently.
Arya joined the BJP this morning in the presence of Chief Minister Pushkar Singh Dhami and BJP State President Madan Kaushik. Kaushik handed her the membership of the party. Along with Sarita Arya, Congress Mahila State Vice President Rekha Bora Gupta and Vandana Gupta also joined the BJP. On the occasion, Sarita Arya claimed that she had come to the BJP unconditionally. After hearing of Arya joining the BJP, Congress expelled Sarita Arya for six years.
It may be recalled that Sarita had been sulking in the Congress after senior leader Yashpal Arya and his MLA son Sanjeev Arya rejoined the Congress party and, in all likelihood, Sanjeev Arya will be given the Congress ticket from Nainital Reserved constituency. Even as some efforts were made by Congress leaders like Mathura Dutt Joshi to persuade her to remain in the party, as part of which she was taken to the Congress Bhavan, recently, but speaking with media persons, she had even then clearly indicated that she was willing to join the BJP if she was given the party ticket from Nainital.
She had further claimed that, in a democracy, everyone is free to choose his or her path. After joining the BJP, she said that she and many other women leaders were being ignored by the Congress party, despite its many claims to the contrary.