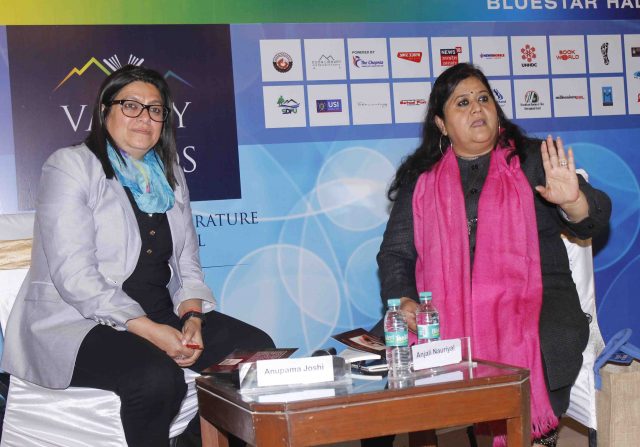 Dehradun, 23 Nov: There were several book launches on the first day of the Valley of Words Literature and Arts Festival here today. The books included novel written by Shubhangi Swarup ‘Latitudes of Longing’, another novel ‘Ron Clark and the Veracity’, authored by young Pakhi Maheshwari, a book authored by journalist and writer Anjali Nauriyal on the ballads from Garhwal region, aptly called ‘Retelling The Story of Traditional Ballads of Garhwal’, and a book written in Hindustani language called Mera Shehar by journalist and writer Jaskiran Chopra.

While Shubhangi Swarup’s novel is an interesting narrative of longings in life some of which get fulfilled while others remain unfulfilled. The launch session was chaired by Anupama Joshi. Swarup revealed fascinating insights into her writing process, the thematic concerns and wavelengths of the book, and the effort it took to write. “When we write in isolation, it’s a challenge to go against the force,” she shared.

Paakhi Maheshwari is a fourteen year old student of Delhi Public School, Greater Noida, whose novel ‘Ron Clark and the Veracity’ is about the adventures of the titular protagonist as he – the Chosen One -fights against The Perpetrator, whose nefarious plans for the world otherwise threaten to overturn life as we know it.  The book launch session was moderated by Jayshree Tripathi, provided an introduction to Paakhi’s book. Paakhi spoke also of her first book which she wrote at the age of six in the pink diary gifted by her mother which first engendered in her a love of writing. Some of Paakhi’s own experiences feature in the book – although altered to suit the narrative – and it definitely has a teenage touch ideal for the young reader.

Dr Anjali Nauriyal’s book ‘Retelling The Story of Traditional Ballads of Garhwal’, took rather a long time to complete and as the title suggests, it dwells on the traditional ballads and folklore of Garhwal region. It includes the most famous of the Garhwali ballad related to life of Madho Singh Bhandari too who sacrificed his son in order to bring water for irrigation of fields in his village.  In a session moderated by Wing Commander Anupama Joshi (Retd), Anjali informed that the book explored the beauty of the Garhwali dialects which increasingly were being sidelined into obscurity. She also narrated the story of Madho Singh Bhandari to the audience.

Jaskiran’s Chopra has authored several books in English and Urdu (In Devnagari script). Her latest Mera Sheher was discussed in an Urdu session which was titled Guftugu and was chaired by industrialist and scholar Dr S Farooq. Gulzar Dehalvi also participated. The book is about life in Dehradun city.

Garhwal Post has established itself as a credible, balanced and forward looking newspaper in India. Based in Uttarakhand, the daily is read by the aware, socially and culturally responsible, high-income elite of society.
Contact us: info@garhwalpost.in
romantic date local free dating sites