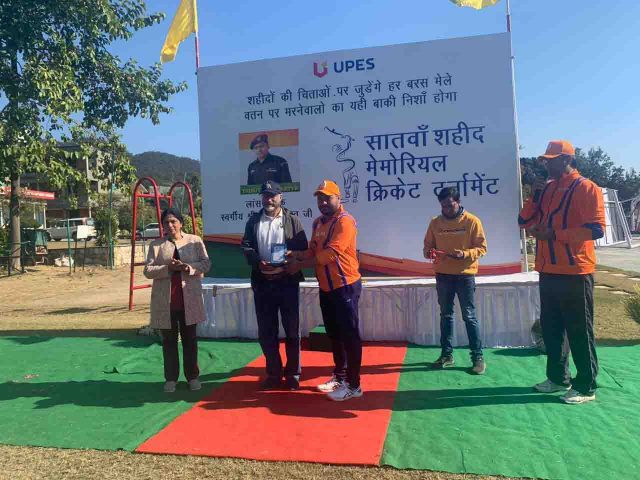 Dehradun, 14 Dec: In the ongoing 7th Shaheed Memorial T-20 cricket tournament, the UPES team won today’s match against the Sales Tax HQs team by 138 runs. Mohit Miyan, who is also the captain of the UPES team, was declared Man of the Match for scoring 165 runs in just 72 balls.
This was the 15th match of the tournament, which is organised annually to pay homage to the brave martyrs of the Indian Armed Forces from Uttarakhand for their supreme sacrifice and honouring their family members.
The UPES team set 273 as a target for the Sales Tax HQs team. The opening batsmen for UPES team were Gaurav Taneja and Mohit Miyan. Mohit Miyan and Sachin Rana had the longest partnership of 258 runs in 115 balls. Mohit Miyan scored 165 runs, which included 11 boundaries and 16 sixes in 72 balls. He remained not out. Sachin Rana scored 93 runs, including 5 boundaries and 10 sixes in 43 balls.
The Sales Tax HQs team scored 134 runs in 19.1 overs.
The 7th edition of this tournament is being organised in the memory of Shaheed Lance Naik Pradeep Singh Rawat of ‘4 Garhwal Rifles’. The final of the tournament is scheduled for 11 January, 2021, when the Martyr’s family will be present and honoured as the ‘Chief Guest’ and beneficiary of UPES homage to Shaheed Lance Naik Pradeep Singh Rawat.